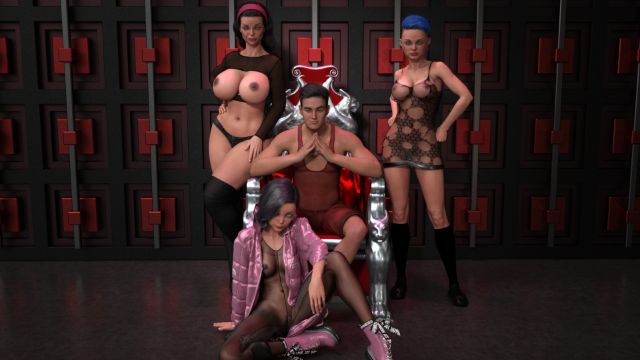 (Previously titled Cumming Home)
Some people have ideal families with parents that love them very much, you’re not one of those people. In fact you’re pretty sure your mother hates you. You have an older sister that is a year older than you and a younger sister that is a year younger than you. Your father died a year after your younger sister was born, your mother raised you and your sisters on her own after that. When you were twelve years old your mother caught you sniffing her panties. She got incredibly angry and a week later she had you sent to a boy’s boarding school. You’ve always felt like she over reacted, but she didn’t even give you a chance to explain. It’s been seven years and you’re being released from the boarding school and you’re taking the train home.

Randy has two sisters, one younger and one older. The three of them are only separated from each other by a year. His father died shortly after his youngest sister was born and Randy has no real memory of him, and neither does his older sister. Despite this, his mother did a pretty good job raising her three children. Yet for some reason unknown to him, his mother sent him to a boarding school when he was 12. Now seven years later he is returning home, he’s about to find out that things are very different than when he left.

For starters, his mother has a mysterious boyfriend that gave her a high-end apartment to live in rent free. Who does that shit? Her boyfriend also seems to have an influence over his mother and sisters that makes him uneasy. For some reason Randy doesn’t trust him and fears that he has an ulterior motive. Add to that he is noticing behavior in his family that has given him cause for alarm. What has happened to his family and what has caused such a dramatic change in their behavior. It is now up to him to either save his family from sliding into complete degeneracy or shift their behavior in a direction that gets him what he wants. Desires that he didn’t know existed in him.

Dominion v1.01
Dominion 1.01 = The game has been rebuilt and rebooted, I will eventually add all the content from the previous build back into the game but it will have to be re-rendered. I have a ton of content to get to before that happens though. I plan on making a lot of content of the time before the MC and his family have to move out and go to live with the aunt and cousin. But rest assured that they will get there.