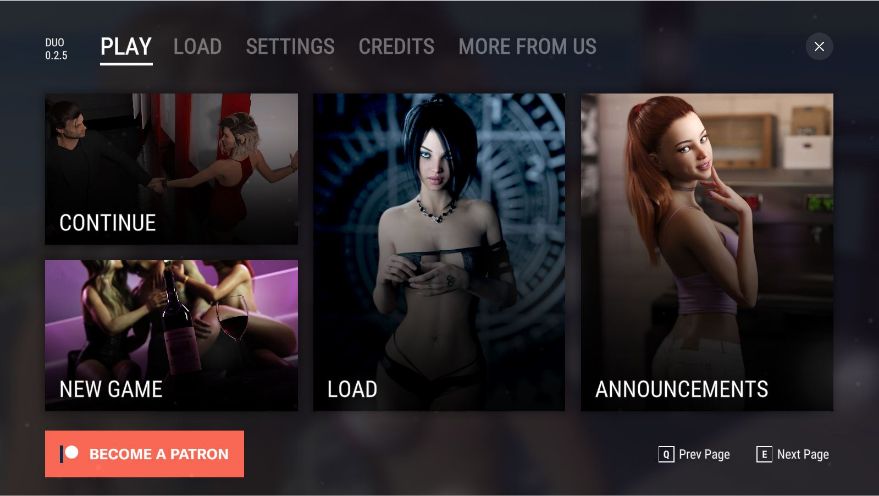 Seasoned Private Investigator, Leo, has not always had a great life. Not until his boss, Mr. Hart, taken him under his wings. Nowadays, as the city is in crisis, a new innocent blood arrives, Julia.
Having a partner for the first time, It is now Leo’s turn to grow as mentor.
Duo is a dynamic story about Leo and Julia, where you play both.
​

0.2
We strongly recommend managing multiple save files for this version since scenes branch heavily (branches are worth checking out).

Game-play features:
Swap points: Added support changing between the protagonists in the middle of the scene, in some scenes.
Save system: Removed save file limit (now unlimited). Added colored badge on top of saves to indicate the active character (Blue for Leo, Pink for Julia).
Locations stay in place: Active location no longer moves to the far most left to avoid confusion now when many locations are available.

– [Remastering] A new game opening scene before the old one (additional scene, not instead).
– [Remastering] New renders for Lena scenes. (and a tiny new scene for her as well).
– Two short animations! (Opening scene, Leo & April sex scene – walkthrough[patrons post])
Animations are something we are still learning and experimenting with. Hope you like them and we will try to improve on them!
– Fixed some dialogues from 0.2 that were written while being drunk (probably).

– New conversation log available next to the Skip button. Or by pressing TAB.
Skip also got a shiny hot key, S.
– You can now also load games from within a game.
– UI Overhaul – New main menu. In-game tip UI (similar to LSS). Game UI next!
– Load and Save menus can now filter files by active character.
– The new “Announcements/More From Us” tab uses internet connection to get a list of our Patreon posts. This is done on demand, if don’t want internet connection to be used, not going to the tab will not trigger it.