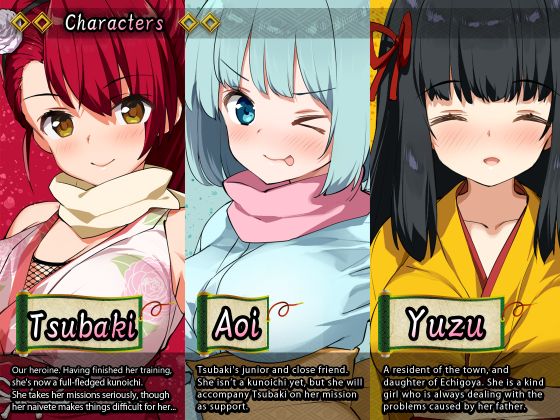 In Japan’s Warring States period, demons known as “warlords” run rampant,
as they feed on the malice of humanity. The people cower in fear at the warlords’ oppression,
and impotently accept their subjugation. But there is one ray of light that strikes through the darkness. The only people with the strength to resist the warlords, are a special group of women, shrouded in secrecy. They are known only as: “Kunoichi” and they, too, are creatures of darkness.

In order to punish the oppressive warlords, first investigate the town by day, disguised as a maid.
Then, use your ninja skills to sneak into their castle at night, and vanquish the enemy!

– Traps
Of course, there are various traps situated in the castle for security.
If she overlooks the presence of a trap and falls into it……?

– Whorehouse
The economy allows no one to live on without money. Kunoichi is not an exception.
If you want to earn money quickly, working in a whorehouse can be recommended.
But if she does too much in a whorehouse… Well, check it out in the retail version!

– Sneak attack
Press the confirm button behind an opponent to perform a sneak attack.
Enemies are knocked unconscious by sneak attacks, allowing you to avoid combat.

When Lust reaches maximum, Tsubaki is in heat.
Being in heat has its pros and cons.
Try to learn how to make the best use of it in each situation.

Being in heat can be canceled by using ‘Mental Concentration’.

– Sexual Attacks
Sometimes enemies carry out restraining attacks.
While being restrained Tsubaki will continuously be given H attacks.

Use one of her Ninjutsu “Taisei wo Totonoeru (fix posture)” to escape from restraint!

~ And More Convenient Functions Are Implemented! ~
– Seduction / Charm
– H Scene Skip
– You can choose to see / skip scenes you have seen
– Save & Load

– Tsubaki
The protagonist. Having finished the ordeal in the Ninja Village, now approved as a Kunoichi.
Serious in missions but sometimes shows ignorance and carelessness.
Because she successfully overcame the ordeal, she is very confident in durability against sexual attacks.

– Yuzu
A daughter of Echigoya living in the town. A tenderhearted girl but annoyed by her arrogant father.

fix now, please don’t rate if your just asking. Rate is for gameplay