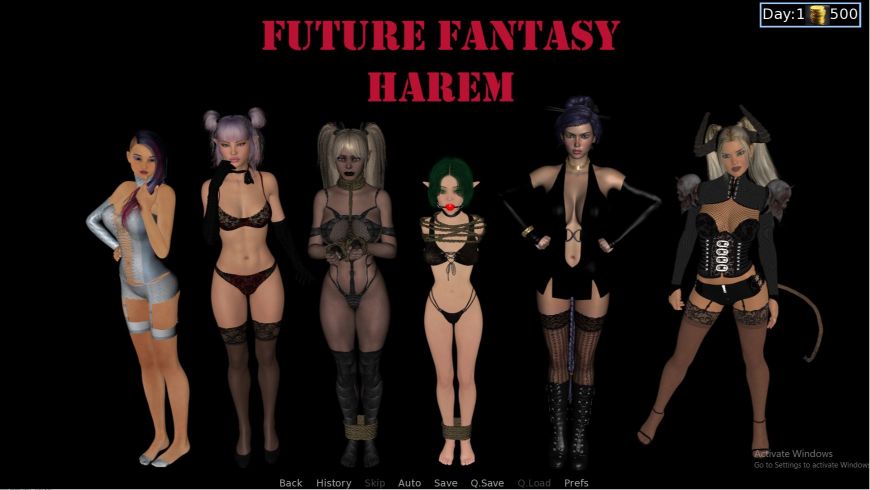 In a post-apocalyptic future, various races inhabit the Earth (Elves, Demons, Orcs and others), or rather, they inhabit the Mainland, the only landmass to survive a series of cataclysmic events. Other survivors found shelter on smaller island, including the scientists who created the artificial island of Myrrial and the spires of gleaming Technotlan, their only city, before genetically engineering a new, long-living human race; The Civilized.
You will play the part of Rigger, a Civilized heading to the Mainland as official envoy of Technotlan and ready to start a new life (you can keep the name ‘Rigger’ or choose a new one). You were tasked with representing your people, but also creating your own harem and producing porn for your fellow Civilized…. but as soon as the game begins, members of Technotlan’s council will also charge you with another far more dangerous mission.

v0.3
– Changed Shandar’s Trial (mc won’t have to share her)
– Made Goth special Production optional, so Goth storyline can be continued even if you don’t want Fern to Play with Ilyana and Sapphire)
– Added several scenes for Shandar (training and punishment)
– Added Cosplay Shop (becomes available after Shandar Trial, at the bazaar)
– From the Cosplay shop only two outfits are available for now: Fern Gimp and Sapphire Schoolgirl (after Sapphire joins your harem), simply because I need time to add more content for the other outfits. The gimp outfit opens another version of her bondage BJ, and the school girl outfit enables a special production with Sapphire (with repeatable scenes after the first performance)
– Added a scene with Keisha, the girl that works at the cosplay shop
– Added other dialogues in the goth storyline (keep visiting Ilyana even after Sapphire joins the harem)
– Added repeatable dates with Fern (the first date will also trigger the next part of the Fern love story)
– Also, after the trial Alchemists abode becomes available
– Created option to have Shandar work for the alchemists (non-sexual, as an assistant) to generate extra income.