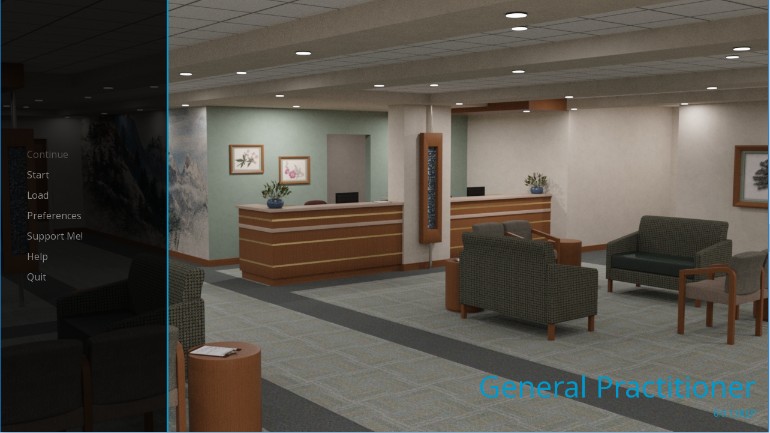 General Practitioner APK As the name suggests you will be a general practitioner, an ordinary doctor who works in a private clinic. It’s a visual-novel-style game with many RPG elements.
The medical part, written in collaboration with a real doctor, will be simulative.
What kind of patients will you examine?
You will be able to examine detailed patients, both male and female. During the game there will be various events that will lead you to examine a variety of people.

v1.2.2
GENERAL:
THIS PATCH IS INCOMPATIBLE WITH OLDER SAVED GAMES!
In order to avoid issues and crashes we recommend you to start a new game!

v1.4
Greetings fellow doctors!
An update of General Practitioner is on its way to your devices! It fixes some bugs you reported and also introduces a new patient with a brand-new examination, codex entry and Steam Achievement as well!

As you’re undoubtedly aware there is currently a worldwide situation with the new 2019-nCoV “Coronavirus”, which is causing serious concerns on the general population. I wanted our good Casanova Doctor to deal with the virus, so I’m introducing you Hann Mei, a Chinese social worker who goes to the clinic with flu-like symptoms for you to check out.

Medical authorities are trying to calm everyone down and don’t cause panic, and I strongly believe that’s the case. The Doctor is going to deal with his usual humor with the situation, but I won’t spoiler you anything because I want you to play the exam and enjoy it!
For those who don’t play “Vanilla” there’s also a brand-new sex scene to unlock, but that’s a secret you don’t have to share

I hope you’ll enjoy this update, it’s my way to defuse the situation and play with it a little

v1.5.1
TEACHING MEDICINE DLC compatibility patch
Fixed an issue which caused more pediatric exams to be loaded in Random Exam Mode than intended
A new option to disable Pediatric Exams has been added in the Settings Screen. This option only disables Pediatric Exams in Random Exam Mode, story mode will still have scripted pediatric patients for story purposes.
Settings screen interface has been modified to include new options
When a pediatric patient is randomly chosen by the game a pediatric ward will be shown instead of the generic clinic
A conversation option to enable/disable pediatric patients has been added to Erika’s introduction to the clinic when starting the game
An option to enable/disable random examinations has been added in the Settings Screen. If disabled the game will pass randomly generated patients to a coworker every time
An option to show/hide the daily report (“Today your staff worked at the clinic”) has been added to the settings screen

v1.5.2
Updated Codex information about the SARS-Covid-2 disease
Made small modifications to Hann’s exam’s conversations to update it with new Infos about the SARS-Covid-2 disease since it was released.
Fixed an issue which caused Katia’s exam to crash
Fixed an issue which caused gaining money from staff to be unavailable if the option to show the daily report was set to OFF

v1.7.1
– Erika’s “good ending” has been rewritten and fixed. If you had a relationship with her and earn enough points a new scene will unlock with her at the end of the game
– Achieving the “good ending” with Claudia has been made slightly easier by lowering the number of points needed for it. All the other conditions still apply (i.e. choosing her as you romance interest).
– Added a dialogue option to dismiss Lacey Greene after her second examination when she comes to the clinic. She will be assigned to another doctor, leaving your care for good.
– Benedetta Borelli is now correctly referred to as “Psychiatrist” instead of “Psychologist”.
– Fixed an issue where, in some cases, you could have repeated the same examination more than once

We disable comments to the public due to high volume of traffic and spam comments, Commenting is only available for VIP members.
0 0 votes
Total Game Rating
Subscribe
Please login to comment
7 Comments
Newest
Oldest Most Voted
Inline Feedbacks
View all comments

How to go to hospital on Tuesday and Thursday??? Cant seem to find any option.