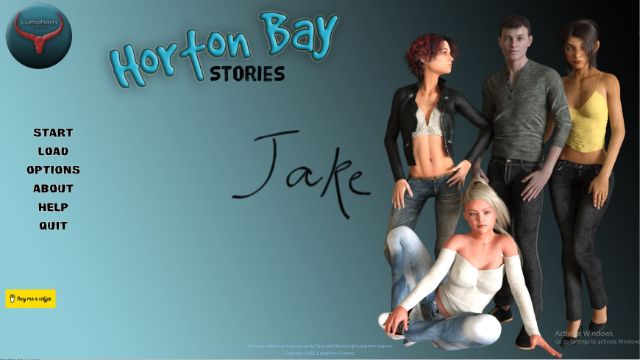 Welcome to our first game set in the town of Horton Bay!
Our main character, Jake (or nickname of your choosing) Rogers, finds himself at the end of his final school year and ready to head off to his local university along with his long term girlfriend and best mate.
That is until everything gets turned on it’s head and forces him to change his plans!
Now with seemingly few options, he decides to travel to the other side of the country to the coastal town of Horton Bay, where he can start fresh and try to rebuild a new life for himself!

He’ll forge new relationships, whether they be good friends, romantic interests, adulterous affairs or simply some good old, no-strings casual sex!
He’ll explore the town and meet interesting new people. Get himself a job and an education. Even find himself getting caught up in the middle of a ruthless crime war!

But most importantly, he gets to start the first chapter of the Horton Bay Stories!

Thank you for your interest and we hope you’ll like it enough to stick around for more!

v0.1.7.1
Fixed: Switching fonts now happens a little faster (Credit to GetOutOfMyLab for the code tweak).
Fixed: During the weekends, knocking on the girls’ doors no longer breaks the navigation screen.
Fixed: Game breaking bug when visiting the Motel.
Fixed: (temp) Missing image when viewing the bathroom webcam in the mornings before checking the bathroom door. Instead of a blank screen you’ll simply see an empty room for now. This will be fixed properly at a later date.
Fixed: Removed some lines of text when visiting Christine’s room that no longer serve a purpose.
Fixed: During the weekend mornings, while knocking on Adel or Gemma’s door, the correct message will now show telling you which one of them is in the bathroom.
Fixed: During weekend mornings, Christine, Gemma and Adel will now properly show up as being in the bathroom at 06:00, 07:00 and 08:00 respectively.
Fixed: Nigel’s missed rent event no longer triggers after having done it the first time if you’ve paid rent that week.

Changed: SMS system reworked. Contacts will now only display after you’ve sent or received messages to or from that person, keeping the screen a lot cleaner. New message icon also now works as intended.
Changed: When starting the quest to find Doc Jones’ keys, there is now an extra hint in the quest log to save some confusion about how to proceed.

Added: Can now give contraceptives to Gemma when chatting to her at home.
Added: Phone call with Carly (both NTR and non-NTR versions) – Main Story.
Added: New photo collectibles.
Added: 4 Possible endings to Episode 2:
– Alone.
– Gemma scene (requires having had the conversation about her pills).
– Adel scene (requires having gone to her job interview with her).
Note: Some of Adel’s content also requires that you had sex with her at the party during Episode 1, but this is optional.
– Christine scene (In Development).
Added: Dialogue Font toggle in preferences menu. (Defaults to DejaVuSans, can be toggled back to the original for those who want it.)
Added: Dialogue Font size toggle in preferences menu. (Medium is the default value.)
Added: You can now find a random magazine on the bookshelf in your bedroom to help build intelligence earlier in the game.
Added: Option to postpone the ending of Episode 2 and remain in Free Roam mode to allow the player to build more stats before the event.

v0.1.6
Fixed: Compass now disappears as intended when talking to Maddy on the beach at 11:00
Fixed: Several dialogue errors
Fixed: If Morals are at 0, gym massage scenes will now play out as intended.
Fixed: If Morals stat goes out of range, will now reset to upper or lower limit respectively.
Fixed: Rhea’s location portrait will now show on the town map as intended.
Changed: Mika’s Friendship point requirement down from 5 to 2 in order to advance the first part of her arc.
Changed: After being invited to Mika’s place to watch TV once, you will now skip the initial conversation outside your house at 15:00.
Added: Can now sell Joints to the campers at the beach for profit – Secluded Cove 21:00 to 02:00.
Added: Meet Roy and his family at his house in the evening.
Added: Meeting Marley. – Amber’s bedroom 21:00 to 02:00 OR during Meet Roy at his house event.
Added: Mika air hockey event at the Arcade – 15:00 Front of your house (Requires 4 Attraction points).
Added: Extended scene with Mika at her house after visiting the Arcade with her at least once – 15:00 Front of your house.
Added: More content to Working Out with Gemma in the evening – Gemma’s Room 22:00 (requires having had the conversation about pills in the bathroom).
Added: Library Interior. The Library will now unlock on the map by either walking inside or speaking to Annie while serving her at the Bookshop.
Added: Studying with Rhea at the Library – 15:00 to 17:00 weekdays in the Study Area.

v0.1.3
Fixed: Reading from the bookshelf in your bedroom no longer breaks when intelligence gets too high.
Fixed: Reading massage books from the bookshelf in your bedroom now grants massage skill as intended.
Fixed: Broken Marley image in relationships phone app.
Fixed: Living Room TV no longer lets you skip time during Day 1 morning, preventing the first few objectives from working.
Fixed: Broken code that prevented players from starting Episode 2 content when they continued in free roam after Episode 1 finished. If your Objectives screen tells you “Episode 2 Coming Soon!”, go to your bedroom to continue the story.

Note: A new save is NOT required, however the sex stats will only start counting from this point forward. Any sexual interactions from old saves will NOT show up. Also, the Current Max Attraction points are relevant to however far you are in a character’s personal arc. For example: Before beating Gemma in the race around the park, her max points will be 4. After beating her, they will go up to 9. The objectives menu will soon be updated with an NPC guide to give more detailed information on exactly how to progress with each character.

v0.1.2
Fixed: Looping/Crashing bug while using the skip function. (Hotfix 0.1.1a)
Fixed: Missing image in Gemma’s room at night.
Fixed: When on the quest to find Dr. Jones, the boardwalk will now unlock when you walk to it after speaking to Brenda. (For some people the location was not unlocking during the conversation with her as it should.)
Fixed: ‘Do Not Disturb’ variables have been de-activated during the party. This was stopping some people from entering the girl’s bedrooms during the event.
Fixed: Replaced glitchy animations of Marcy at the motel.
Fixed: Removed Compass from the screen when entering into dialogue with various NPC’s.
Fixed: Can no longer leave the bookshop before asking about the job during Episode 1.
Fixed: Taking a Bath or Shower at 23:00 no longer breaks navigation in the hallway.

v0.1.1
Fixed: Error when covering Christine with her blanket as she sleeps.
Fixed: Walking to the pub and entering will now unlock the location. Also now stops you from jumping into a specific area of the pub using the quickmap when closed.
Fixed: On the Town Map, NPC’s are now correctly shown at locations when hovering over a fast travel button.
Fixed: SMS screens now work (functionality to be added soon.)
Fixed: Objectives button now working while phone or map screen active.
Fixed: Activate Spycam quest log integer will no longer go out of range.
Fixed: When exchanging the Doc Jones video for the toy, the correct animation will play.

Changed: During the prologue, going to find the girls to ask more about Rupert is now automatic. Simply choose who to speak to first.
Changed: During Ep1, after the pub you can now stop Jackson before he has sex with Claire, even if NTR is on.
Changed: Editted some of the pop up notifications to be more specific.
Changed: Made a start on replacing a few renders that needed some work. WIP
Changed: Made minor adjustments to Christine’s face. Mainly around the mouth. (For future renders)
Changed: Removed Crystal’s ‘excessive’ makeup and gave her a slight tan. (For future renders)
Changed: Changed colour of Fast Travel buttons to be more visible when unlocked.
Changed: New side portraits for Crystal, Adel, Lillie, Christine, Gemma, Nigel, Roland and Louise.
Changed: With NTR OFF, Lucas no longer has sex with Christine while spying on them at night with hidden camera.
Changed: With NTR OFF, you will no longer have to watch Jackson have his way with the skater girls during Episode 1.
Changed: With NTR OFF, you no longer have to watch Rupert’s perverted daydream about your house mates.
Changed: When making coffee for Christine and Lucas. If NTR is OFF, no matter which options you choose, they will not have sex.

We would have liked to have made a start on the Episode 2 content aswell this month, however we were without a rendering machine for 2 weeks and didn’t get the time. It’s top priority for the next update though.

If you find that certain animations are not looping correctly, saving and reloading the game fixes it. Not sure why this happens, but I’m looking into it.
A couple of the new animations (Marcy and Abi) need to be re-rendered, but don’t have time this update. Will be fixed for the next one.