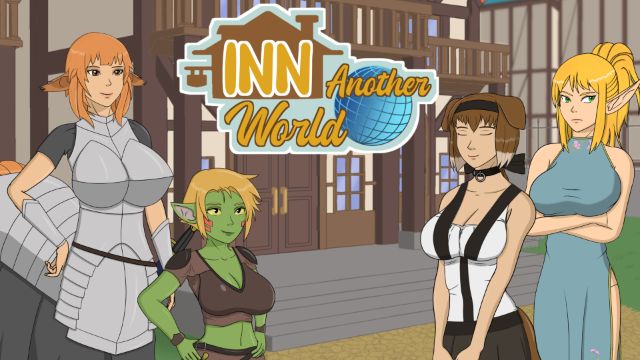 This is a hand drawn Visual Novel/Dating Sim game, where you run an Inn in, you guessed it, another world.
Thrown into an unfamiliar world, you must survive and manage your inn,
while learning about this new world you find yourself in.

Hello! My name is Dagotto, and I’m creating Inn Another World!

A diverse cast awaits you, including:
Alice
A goblin adventurer, she is the first person to come to your inn.
Cheerful and straightforward, she doesn’t seem to want to get too close to anyone.

Vera
A dogkin slave, she is the first slave available to you for purchase.
Although she seems upbeat and positive, it she really okay with her place in life…?

Tirria
An elf hunter, she seems standoffish and rude.
She seems to be overly concerned with other elves, but at the same time appears to be a loner.
Perhaps she could use a friend.

Maria
A centaur knight, her race carries a heavy reputation.
Though she seems different from what others expect, it’s hard to say if she is truly harmless.
She seems to be on some kind of quest.

Sonia
A harpy shopkeeper, she is cheerful and amicable to a fault.
She runs the general store in town, and is eager to get to know newcomers to the area.

Camilla
A lamia librarian, she is soft-spoken and nervous around strangers.
She loves books, but is frustrated with the state of the town’s library.

Beth
A cowkin farmer, she can be found selling her wares in the town’s market.
Kind and motherly, she has a young daughter at home that she is raising by herself.

Kirana
A gnomish inventor, she can be found tinkering in her shop late into the night.
Optimistic, she wants to change the perception of new technology in the town.

Sacha
An orc lumberjack, she works at the lumberyard in the outskirts of town.
Brutally honest to a fault, she says what’s on her mind whenever she speaks. She can often be found drinking the night away after work.

Ritsuki
An oni blacksmith, she has trouble talking to people.
Her store has gotten a bad reputation due to her communication issues, but she doesn’t know how to fix the problem.

With more girls coming in the future!

v0.04
New Content:
-Added 3 new areas
-Added 10 new scenes for Camilla
-Added 14 conversations for Camilla
-Added 3 scenes for Sacha
-Added 5 conversations for Sacha
-(More of Sacha’s story will be coming in patch 0.045)
-Added 2 scenes for Alice
-Added 2 conversations for Alice
QoL Changes:
-The map is now accessible from any screen
-Overhaul/Update to the relationship tracking UI
-The relationship tracking UI will also show when there is no more story content for a character
Bug Fixes:
-Updates to the character tracking system on the map (there may still be a few, so please report any issues you find with it)
-Added an indicator for one of Beth’s events that was hard to find
-Added an indicator to let new players know the location of the scene viewer -Balancing for gold and skill increases
-Various conversation bugs/changes

v0.035
-Added new variations to repeatable scenes for Alice, Maria, Vera, and Beth. (Something for all you booty lovers out there.)
-Added a function to the map screen which tells you where girls are at the current time. (This feature is still new, so please report any issues you have with it)
-Added a new button to go directly to relationship advice from Rei on the main UI.
-You can now access the map from Beth’s bedroom (more places will be map-accessible in coming updates)
-Added a new item to the general store to help raise stats, go ask your shopkeeper about the books she sells!
-Improvements to the save upgrade system
-Numerous bug fixes and general improvement to several conversations and events.
As this is a minor patch, it will be available to everyone at the same time. The next major patch will be focusing on new characters, so please look forward to it.

Changes:
-Added the ability to have Vera automatically clean the inn once you get to a certain point in her story (Thanks to mrttao on the Discord for the suggestion!)
-Added a button to go directly to the counter of the inn (Thanks to Forgotted on the F95 forums for the suggestion!)
-Added weekdays and weekends to the game (used in Beth’s story, will be used in future storylines as well)
-Overhaul to the relationship tip system, including a new GUI and hints to find characters the player hasn’t met yet -Inflation has struck the economy! (Cost of almost all items in the game increased to make money have a little more meaning)
-Various art adjustments, dialogue changes, and spelling fixes
-Bug fixes and balancing adjustments

QoL Changes:
-Added labels to the arrows in the UI which tell you where the arrows take you. (Credit to “ProMasturbator Dave” on the f95 forums for the idea)
-Added the ability to repeat sex scenes for the four main girls by talking to them in their rooms.

v0.01c
Bug fix #2, current, corrects a mistake where too little XP was given for charisma