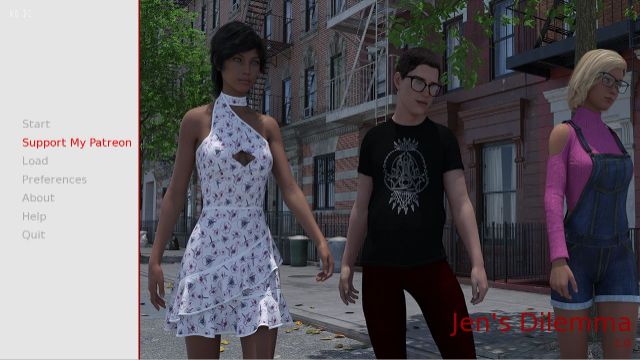 The story revolves around Jenny and her family, going through the struggles of life. She went from riches to rags.​

Nadia event: Fighting back to regain power over the main character (After you rat on her because she calls Stewart). Nadia catches him with Elaine on Tuesday night, short scenes here, but they have something related to Nadia story. (Please note that this is advanced in the game, you need to have done stuff with Nadia, plus you have seen her calling Stewart as I said above) There are scenes in his room, and scenes on the nude beach with Rowena for him to fight back.

Short scenes between Jenny and Nadia, where Nadia shows her pervert side, it’s going to be your choice if you want her to continue in such route
Many hot scenes with Nadia. I’ll help you with few, one is after lunch, while washing dishes and one in toilet in the morning, if you buy the screwdriver.

Scenes with Rowena in toilet

Scenes with Rowena and her bf, include some drama with main character, it happens after you catch her in your toilet stealing lipstick, you should visit the nude beach with Rowena/her bf/ and Nadia, and remind her about it then later on you’ll get a call from her while in main character room at 19:00, once you go there, you have to select the right option for mc to get bruises, only then when Jenny sees his bruises he brings up the imagination of her being a nurse, that’s when you can buy the nurse outfit.
Fixed some bugs

v5.0
What’s new:
TV event, more scenes with Jenny, in two different events (for you to find out)
Bad grades and study event for Nadia
Rowena visit, leads to an event which starts in V6
New event with Elaine, this one is tricky, I’ll leave it for you to find
Beach event, leads to two different options during the week
Toilet scenes with Nadia…
Corruption points started for Nadia
Added some scenes from Jenny’s perspective
Added several options to get relationship points with Jenny
Fixed extra time jump in some events, especially when going to the cinema…

Eror when you go relax at 10 morning with sister after going to pool , it’s jump back to main menu