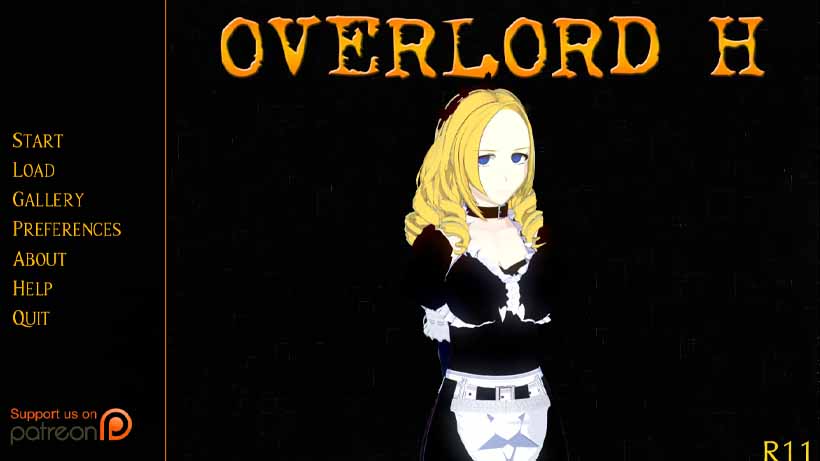 You are spending the final minutes in your favorite DMMO-RPG, YGGDRASIL before it shuts down for good at midnight.

However, when the time comes, nothing apparently happens.
Unable to log out, you are stuck in a world that looks similar to the game yet so much more realistic, especially the NPCs that begin to behave consciously…​

-Changed: Nigredo gallery category has been removed, all of the other missing categories have been added.

-Changed: World map has been overhauled.
-Changed: You can quickly exit the gallery by pressing “ESC”.
-Changed: Arche, Rubedo and Imina have their own custom font now.
-Changed: Lizardman village’s access has been moved to the Great Lake.
-Changed: R21 side events play an objective before and last till the end of day 71.

R29
-Fixed: Solution’s CG 7 and 8 event not triggering (Requires loading a save prior to day 160).
-Changed: Warning text to make it more obvious that it is indeed possible to have a harem in this game (Thanks Sewyoba for bringing this issue to my attention!).
-Added: 18 CGs.
-Added: 22 Side Events.
-Added: 3 Mirror Events.
-Added: 1 Territorial map (Dwarf Kingdom).
-Added: 2 Maps (Azellisia Mountain Pass, Azellisia shelter).
-Added: 18400 words (~60 minutes gameplay).

R30
The patch fixes Shalltear’s event showing as unavailable, it only happens when she has been chosen as second companion and not first.
If her event did not show as unavailable, you do not need the patch.
-Fixed: Integrated patch 1 from R29.
-Fixed: Misc CG 66 correctly marked as “Mirror event CG”.
-Fixed: Yuri’s orphanage side event is no longer doable during day 168 and will not overwrite her new side event.
-Fixed: Minor typos.
-Fixed: Shelter day map not loading when forced through console.
-Fixed: Hotspring scene now shows Narberal pregnant when she is pregnant.
-Fixed: The suspicious door no longer sends you back to the Sorcerer Kingdom if entered through the Dwarf Kingdom.
-Changed: MISC 21 CG has been animated.
-Added: 3 CGs.
-Added: 1 Side event.
-Added: Scene to secret and Mare gold token.
-Added: Progress checker in gallery (only works in-game, not from main menu).
-Added: 1 Character (Matriarch Drider).
-Added: 3 Maps (Feo Jera, Feo Raizo, Feo Berkana).
-Added: 9300 words (~30 minutes gameplay).

R36
-Fixed: Rosalyn’s CG 10 shows in her gallery category now instead of MISC.
-Fixed: Children’s side events will not repeat after progressing with the main storyline.
-Fixed: Typos (Thanks Pimgd for reporting them!).

R39
-Fixed: Minor typos.
-Fixed: Hovering above Wyvern Rider Tribes territory would not highlight it.
-Fixed: World map correctly displays the conquest of the Beastman country.
-Fixed: All of the conquered territories are highlighted in black.
-Fixed: Territories no longer stay highlighted when closing the world map.
-Fixed: Pressing the menu key will now close the mirror screen.
-Fixed: Shalltear no longer loses her bra during her handjob scene.
-Fixed: Centaur’s scene crashing during pregnancy.
-Fixed: The game executable icon has been restored with no more false positives.
-Fixed: Side events in E-Naüru are correctly marked in the world map now.

R40
-Fixed: Great Lake event marker.
-Fixed: Albedo referring to Yuri as Solution in Mirror Event 6.
-Fixed: When entering the Great Tomb of Nazarick from outside, it will no longer force you out again when accessing the console.

R43
-Fixed: The game correctly sets your choice regarding Kelart even if you have temporarily altered it through console.
-Fixed: Viewing the last objective of R42 properly stores the map you are in now.
-Fixed: Check during Fluder’s reward scene.
-Fixed: I forgot to enable Nhinne’s gold token in R41, it is fixed now.
-Changed: Cherry Blossom Sanctuary’s music volume has been lowered.
-Changed: The game stores whether you interacted with Clementine or not before going to the Elf Country (For dialogue reasons).
-Added: 2 Mirror events.
-Added: 4 CGs.
-Added: 1 Map (Crescent Lake).
-Added: 4 Side Events.
-Added: 1 Character (Salurn).
-Added: Roesia’s and Sayuri’s gold token.
-Added: 6500 words (~20 minutes gameplay).

R44
-Fixed: Gazef no longer appears in Carne Village when he is dead.
-Fixed: Shizu’s token will no longer appear over Lupusregina’s when you have used up all your charges.
-Fixed: Kurome’s token no longer overlaps with Shalltear’s on day 160.

R45
-Fixed: Minor typos (Thanks Pimgd!).
-Fixed: Arche’s dancing event now requires her to be alive.
-Fixed: Tia using the wrong token in mirror event 58.
-Fixed: Gazef’s event is no longer marked in Carne Village if he is not alive for the event to exist.
-Fixed: Brita displays her name correctly now.

-Changed: Zesshi has her own category in the gallery now.

R47
-Fixed: Folding chair in the beach no longer shows up once you are back home.
-Fixed: Minor typos.
-Fixed: Lupusregina’s CG 1 thumbnail displaying incorrectly.

-Changed: Added supporters from 20 May to 31 May (Credits were also rendered again).
*If your game has frequent memory errors, even if you changed you renderer, then download the 64bit version.

-Changed: Nigredo gallery category has been removed, all of the other missing categories have been added.