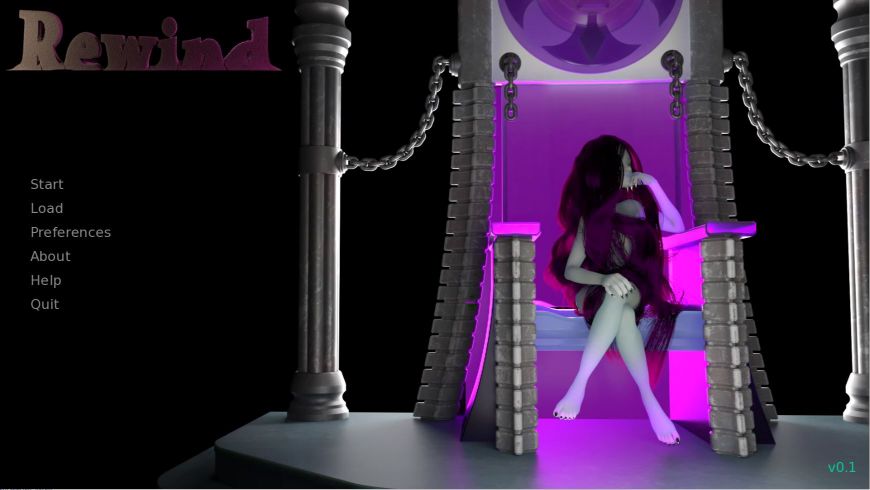 after a long night correcting the codebase for a new Web 3.0 Meme Sock Generator, you left work before the morning traffic hit. As the sun peaked over the skyline, you meandered your way through the streets, looking at the morning scenery: trees, mailboxes, lesbians making out at the park. That last one held your fancy for a while, and then…. things turned strange.

The Goddess seems like a bitch, straight up. Like, why she gotta be that way? Anyway, long story short, now you’re an infant on a never-ending quest. As you grow, you’ll encounter good people, bad people, strange people, cat people, elf people, god-type people… and then you’ll die. And then you’ll start again. But this time it’ll be different. You’ve learned some things, after all. That damn chicken can’t boss you around forever.​

*Lani massage scenes are no longer triggered by sparring with Lani. They are now unlocked after the third tent scene (15% chance while at home in the evening).

New scenes should be compatible with old save files.

Public release changelog (v0.2.7.1):
Additions:
– Two additional Lani camp scenes.
– Marla content has been entirely replaced. New content includes new sprite character assets, two new rendered story scenes, one rerendered story scene, additional spoken dialogue, and nighttime sneak content.
– Chicken content prior to day 30 has been finished. You can now speak to your father regarding chickens, chicken scenes with Marla are remade, and the chicken can be killed prior to the battle (for much greater rewards).
– Soul Box can now be leveled up to 4.

*** Chicken route (unavailable after day 30 due to chicken mutation) = 30% chance to hunt hens in the evening with Marla starting on Day 1. After 4 hunts, a rooster hunt will be available, but can only be completed if the player has achieved Chicken Immunity. This is a story-based kill, so level/stats are irrelevant. Additional lore and chicken story content is available through interactions with your father in the evenings (50% chance when hunting event is not available). Dialogue and rewards from your father are available after two hens are hunted and change with each additional hen.****

Changes:
– Large numbers are now displayed as human-readable text (‘12.3 million’ instead of ‘12380145’).
– Player can now sleep during the day to pass time.
– Daily choices have had their rewards rebalanced. As of this update, there are no entirely worthless choices, and some story and lore-related content has stat-boost incentives.
– Studying on your own is now just as effective as studying with your mother, and there is a 20% chance of gaining a revelation to increase your intelligence even further.
– Soul Box status (description, till next level, etc) has been added to the inventory menu.
Corrections:
– Lani’s tavern date now requires that she be in your party.
– Chicken is no longer named Clarice.
v0.2.6
Additions:
– Two additional night scenes with Lani (continuations to the camping sequence, same requirements).
– 5 new enemies.
– 6 new drop items (these will help players earn a bit more money for future expensive story upgrades).
– 7 new adventure guild missions (starting at guild rank 5).
Changes:
– Font corrections.
– Android version now has ‘hide’ button to remove text box.
– Goddess of Time now gives you multiple options at day 100, instead of the initial “die or get 5 days more” choice.
Corrections:
– Master of All no longer gives 37000000% stat boost.
– Various typos.
– Blood wolves no longer appear invisible before first action.
Known Issues:
– ‘Current Progress’ section of the Mirror is outdated.
– No player battle skills have animations at this time.
– Not all player battle skills have been tested. Skills with effects other than ‘damage’ may not work correctly and could cause a game crash.
– Various spelling corrections have been noted and will be corrected in the next incremental update.

– The Sneak skill tree is active and sneak books have been added to shops and reward lists. Sneak-related battle skills (opened at Sneak level 5) are not fully tested.
– Sneak content is added for Lani’s bedroom at night.
– Some additional camping renders for the tent scenes with Lani.
– Sneak content has been unlocked in the Temple with Bess, and a slight extension has been made to allow the player to catch her based on sneak level.
– Night-time is now treated like any other active time of day – you will no longer randomly not be able to sleep when an event is active and will instead be able to choose to leave your room at any night.
– Soul Box has become an upgradable skill and levels along with the highest number of item slots you have filled in your inventory (counted every morning). The maximum level is currently 3.
– Mirror menu now shows discovered titles, non-discovered titles, full stat breakdown, earned skills with skill descriptions, and the player’s current stat-modifier values (+% from titles).
– Additional (intermediate) skill books have been added.
– Two titles have been added (‘Rogue’ and ‘Shadow Thief’). They are unlocked via the Sneak skill at levels 4 and 9 respectively.
– Guild rewards added through level 6 and Temple rewards added through level 7.
Fixes:
– Potions can now be used while camping.
– Title modifiers will now accurately buff Endurance and Agility.
– Title modifiers will now accurately increase Magic Book experience gain.
– Title modifier for Jack of All level 10 now works correctly.
– Can no longer get unlimited battle rewards (sry).
– Scroll Bars are now attached to shop windows.
– Input menu has been removed from Android version… may add it again after further investigation.
– Various typos and other programming mishaps.

v0.2.3
– Camping feature has been added. High level quests now require between two and 15 days to complete. New interactions and renders for Lani activate when she is camping with you in your party.
– Checkpoints added in case of accidental death.
– Health Potions have been added in three flavors (at the guild shop).
– 6 new enemies up to level 10
– 5 new enemy skills
– 6 new titles (based on character level achieved at death, party level achieved at death, health potions used, days spent camping, number of total enemies killed (over multiple lives)).
– Removed skip to day 5 and stat saving features (to be replaced with a better system in next version).
– Corrected duplicate item bug in Soul Box (items now duplicate properly).
– Quests in the adventure guild now populate based on guild level (up to level 5).
– Guild and Temple levels now have no upper limit (though rewards stop at level 4 in the temple).
– Many more drop items for players to use to earn money (but not much to buy yet).
– Combat has been sped up.
– Probably other things that I can’t remember.

Known Issues in Version 0.2.3:
Users with save files from previous versions may find an error code when saving a non-equipment item in their Soul Box at rebirth. This is an error that has appeared once in testing, but couldn’t be recreated.

v0.2
– Additional stats have been added for turn-based combat (base attack, magic attack, defense, m def, speed, evasion, accuracy, luck, crit chance). These are based on your level and your base stats (strength, endurance, intelligence, agility, magic).
– Old school turn-based combat has been implemented (still extremely rough around the edges).
– Quests are available at the adventure guild.
– Adventure guild requirements have been loosened (previously required two physical titles, now requires only one).
– Inventory has been added (available in your bedroom for now). This same screen also shows your battle stats and exp level.
– Palace story content has been added (access by finding the statue, guard house, and potion shop clues, then waiting a day).
– You can now kill the chicken, but he’s pretty strong, and the story content related to him is currently absent (coming soon).
– Since you can kill the chicken, you can no longer perpetually skip the chicken by staying in your room all day.
– Corrected random images popping up in Lani’s night scene.
– Corrected a few labeling mistakes in the god and temple leveling code.

Known Issues with v0.2:
– Stacking inventory items (monster drops right now), do not accurately display their quantity.
– Since effect animations are absent from the battle system right now, it feels very choppy.
– Balancing monster difficulty will be an ongoing thing.
– Cannot bypass chicken until life number 3 (this is a bug, it’s supposed to be life number 2).
– There’s still a ton of polish needed for all of the new elements in the game. If you see an error message, do please let me know, but it’s probably related to sprite animations/attack skill animations, and if you click ‘ignore’ it should continue on with the game with no more problems.

v0.1.9
– Sneak skill is implemented (one sneak scene is currently in place)
– Palace content/story has a small teaser in place. To access, find both the tunnel and the dragon and wait two days.
– Official ports for Android and Chromebook users.
– Additions to the mirror status screens.
– Extensive coding updates that will hopefully not murder the game.

Known issues:
– The wrong image pops up in Lani’s night scene… it’s fixed in the Patron version.
– Error message when leveling up the temple in a life after you’ve previously leveled up the temple. Corrected in next release.

v0.1.8.1
– Temple Interior environment has been added.
– Four starter Gods have been added.
– Two additional title levels per God (and one skill that has no use).
– Significant changes to the menu screens.
– Lani Sparring scenes corrected.
– Mirror menus have been optimized.
– Day six crash bug resolved.
– Sparkle image corrected.

v0.1.7
– Professions have been added as additional options for morning activities (along with appropriate story scenes).
– Two new locations for profession-related events (Temple and Adventurer’s Guild).
– Bess has a new night scene (story-related).
– Bess sprite has been upgraded and new clothing has been added.
– Lani sparring event has been completed. (only for winning scenario – losing is borked and fixed in the next update)
– Hitting the chicken now includes the appropriate action image.
– Finding a book in the library now means that you will always find it in the future.
– You can no longer find the Adventure Logbook over and over again.
– Option added to avoid viewing sexual content between people who are not the player.
– Being killed by chickens now earns additional levels of chicken phobia titles.
– Mirror screen now shows additional information.
– Clicking on a stat will no longer murder the game.
– Earning Jack of All will no longer murder the game.

v0.1.5.1
– Shrine clue has been added.
– The first magic has been added (light magic).
– All clues are available to choose regardless of stat level (finding clues still relies on a stat roll + experience modifier).
– You no longer need to witness Lani in the tree to gain affection from it.
– Correction of spelling errors (and creation of new ones).
– Small fiddly code bits that won’t impact player experience.

v0.1.4
– Potion Shop clue has been added.
– Additional night seen added for Lani (contains low-quality place-holder animation).
– Clothing changes now available in the mirror screen.
– Finding a clue in one life will improve odds of finding it in future lives (five times currently equals a perfect chance).
– New title added (‘Jack of All’).
– Experimental save function added to the end of Day 5.
– Correction of spelling errors (and creation of new ones).
– Small fiddly code bits that won’t impact player experience.