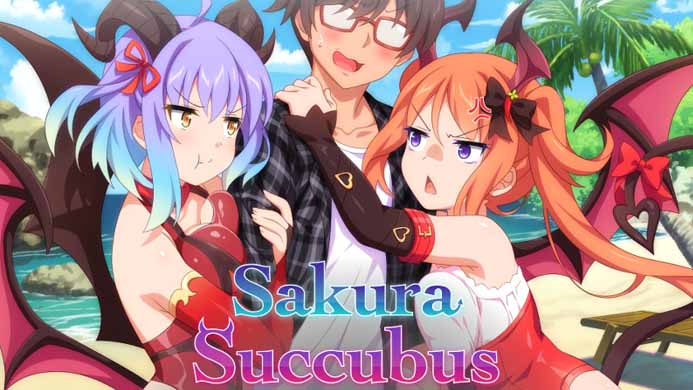 Sakura Succubus is a lewd visual novel about amassing a harem of sexy succubi. Featuring a cute idol, a domineering businesswoman, and a spacey social media star, there’s no shortage of women to woo!

Ogasawara Hiroki is a thoroughly average man. A photographer by trade, he works long and demanding hours every day, all the while overseen by his tyrannical boss.

Living in the middle of Tokyo on a paltry salary, Hiroki resides in a small, run-down apartment, and eats instant noodles to survive.

His life can hardly be called ‘glamorous’…

Until one day, that is, when he’s tasked with taking photos of Japan’s top idol, Ikue Ayu.

One thing leads to another, and Hiroki soon finds himself at the mercy of three beautiful women – all of them celebrities. There’s the cute idol Ayu, the sultry businesswoman Marina, and the airheaded social media star Cosmos. They’re all rich, famous, and extremely well-endowed, and they should be utterly unattainable…

But, for some reason, they’re insatiably attracted to Hiroki!

According to Marina, these three women are all succubi, and they find Hiroki’s scent intoxicating. They can’t get enough of him – and soon, Hiroki’s average life becomes anything but.