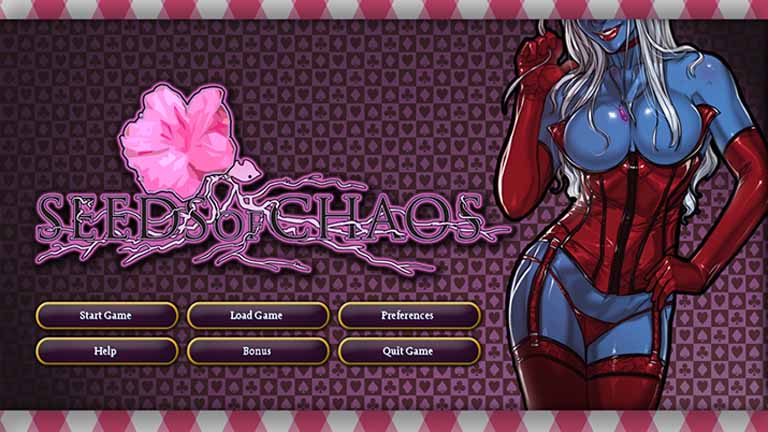 Seeds of Chaos APK is a free to play dark fantasy eroge made in Ren’py, inspired by the worldbuilding of Berserk, Dark Souls, The Witcher and other epic fantasy series’, as well as the adult games Corruption of Champions, Legend of Queen Opala, and Slavemaker. The game is set in The Six Realms, the westernmost continent in the world of Solanse. Seven years have passed since the last Demon War, and the defeat of Lord Karnas at the hands of the forces of Light ushered in a new era of peace and prosperity for all the races of the six kingdoms. Evil never lies dormant for long, however, and in the shadows new threats to the tenuous peace begin to stir.
In the first scenario, you play as Rowan, a veteran of the last Demon War. He and his fellow heroes, aided by the Goddess of Light, pursued Karnas to the heart of his stronghold, Castle Bloodmeen, and defeated him once and for all. Having hung up his sword upon returning to his peaceful home village and marrying his childhood sweetheart, Alexia, he finds his idyllic life shattered by the arrival of a beautiful, mysterious woman. Before he knows it, he is forced to serve the very darkness he fought to destroy seven years ago.

REWORKED EVENTS
– The remainder of the intro has been reworked, including improvements to the first Rowan x Alexia sex scene, and a rewrite of the village elder’s death event

QoL
– Alexia’s job menu now appears on week 22, not 23, as intended
– Added Alexia corruption gains to two twins related events that did not award any
– Fixed an issue where Heylana’s acclimation event could trigger too early
– Changed Nasim’s sprite to his correct hooded sprite in his abbey event
– Fixed an issue where failing to gain access to Ulcro did not unlock the axe at Cla-Min’s shop
– Fixed an issue where the player could not request Cla-Min to provide a distraction during Delane’s escape
– Changed the event for Raeve infiltration to trigger immediately to fix issues with it clashing with other events
– Added skillchecks to a number of Shaya investigation events
– Adjusted the priority of a number of early events to fix issues with events not triggering in the correct week

The focus this month has been on two areas; expanding the Rastedel narrative, and introducing a new Castle NPC – Nasim. We’ll be continuing to work on both in the current month, as we bring the end of the first chapter to a climax with the closing of the Rastedel event chain. In addition, we also have added a number of general events, including new fey events, to this release to round the content out.

NEW EVENTS
As mentioned above, the focus has been on two areas this month. Firstly, Rastedel, and players can now attend the post-battle victory feast in Bloodmeen, as well as return to the city to revisit two of the major players. Secondly, the new NPC, Nasim, who will appear in the castle during a new event on week 15, and can be visited in the library for a number of new events and conversations.
In addition we also have two new Fey events on the Midnight Court side, that can be seen by visiting Arzyl in the castle, as well as two new Abbey resource events, both featuring Cliohna, and one new Tavern job event.

This release should be a pretty big deal for the Alexia and Jezera fans out there, as the centrepiece is a long event between the two that starts the path of Alexia falling under Jezera’s sway.
We also have a bunch of other smaller events, including new ruler events, a new job event, and a rewrite of some of the current Cliohna events to take the character in a bold new direction. We’ve also been making strides on the technical stride, implementing something people have been asking for – the ability to trigger character events from their rooms, as well as setting the foundations to improve the game’s core mechanics over the next few months.
ART
This month we have nine new CGs, as well as one new background, and one new background variant:

NEW EVENTS
The main focus this month was on advancing Alexia’s corruption arc, following the recent addition of the first event in that narrative – The Demon Tree. Players who have been having Alexia spend a lot of time with Jezera will get to see her work her magic on Alexia, and attempt to pull her strings as only the demoness can.
In addition, we have three new ruler events, focused around everyone’s favourite wheeler dealer goblin, Cla-Min; two of which feature her interacting with the recently added character, Nasim. We have also overhauled Cliohna’s narrative arc, adjusting scenes to focus more on magical elements, as well as added one new job event for Alexia.
This month we have three new sex scenes:
– Jezera x Whores (Yuri)
– Jezera x Alexia (NTR, Yuri)
– Cliohna x Rowan (Magic)

v0.2.47
It is the end of the month, so that means it is time for another Seeds of Chaos backer release! A bit of a slog this month, with a few issues, as well as another bloody heatwave, but with some hard work and determination, we managed to get everything ready on time for the new version.
Once again, the focus this month was on adding more Rastedel content as we move towards getting it completely finished over the next two months, and Winter has written two more events that bring us quite close to the end of the current phase. We also have one new ruler event that further explores Rowan’s relationship with Cliohna, for those of you interested in our resident librarian, as well as a new Fey event with the foxy (pun intended) Heartsong.

NEW EVENTS
Once again, as previously mentioned, we have pushed forward with the Rastedel narrative arc, adding two more events where Rowan carries out his first task for his chosen ally. We also have one new ruler event featuring Cliohna, that diverges heavily depending on Rowan’s previous two encounters with her, as well as a new Fey narrative event with Heartsong.

This month we have three new sex scenes:

NEW EVENTS
As mentioned earlier we have one new Rastedel event, which features a major development in regards to Lady Delane, as well as three new ruler events (one of which continues the fey narrative arc), and six new job events for Alexia (a number of which are medium corruption job events).

As mentioned earlier Rastedel is the focus this month, with nine new events to experience in the city, including further meetings with Patricia, Juliet, Baron Casimir, Captain Alarie, and a whole new area to explore – the Northside Alleys.

In addition to the Rastedel content, we also have two new ruler events, one of which is the concluding event for those on the Cliohna submission path, three new job events for Alexia, three more orc tribe resource events, and a new training event for the Helayna bedslave path.
This month, we have six new sex scenes:

We have also added a number of QA features, including:

v0.2.62b
This time our focus was on, and it will be for a lot of the near future, working on the NPC narrative arcs for this act. To this end, nearly all the X’zaratl events in-game have received a rewrite to bring them in line with her planned arc, alongside two brand new events. In addition, we also have more progress on the Jezera NTR narrative arc, as well as a number of new ruler, map, and job events.
ART
This month we have 18 new CGs, with 41 variants, and 12 reworked CGs:
Rickon x Cla-Yill CGs 1 & 2 (with 1 variant)
Rowan’s Knighting CG (with 2 variants)
Jacques Fate CG (with 4 variants)
Alexia Meets Greyhide CG (with 2 variants)
Jezera x Alexia CG
Alexia x Mary CGs 1 & 2 (with 4 variants)
Jezera is Stressed CG (with 3 variants)
Shaya’s Orgy (with 1 variant)
Rowan x Courtesan (with 3 variants)
Rowan x Helyan CGs 1 & 2 (with 3 variants)
Rowan x Kether (with 2 variants)
Rowan x Bootleg Alexia (with 4 variants)
A Dream of Karst (with 1 variant)
The Arrival of the Emissaries CG (with 2 variants)
Alexia’s Fertility Treatment CG (with 5 variants)
Reworked 12 breeding pits related CGs to better fit the game’s aesthetic
NEW EVENTS
As mentioned earlier, the main focus of this release is the X’zaratl narrative arc, and three of her events have undergone extensive rewrites, alongside two new events, one of which is an Alexia and Rowan sex scene. The Jezera NTR arc also has a new events, which features two sex scenes; Alexia distracting a female orc warrior, and Jezera rewarding Alexia for a job well done.
Outside of character events, we have four new ruler events, which include two sex scenes, a new one for Rowan and Draith, as well as a scene between Rowan and two members of the goblin Cla clan. We also have two new forest exploration events, which include one sex scene between Rowan and a proud huntress, as well as three new breeding pits job events, in which Alexia “meets” Draith’s newest charge, Sil, an aquatic lifeform.
This month we have seven new sex scenes:
Rowan x Alexia with X’zaratl (Vanilla, Breeding)
Female Orc x Alexia (Orc, Light Femdom)
Jezera x Alexia (NTR)
Rowan x Darla the Huntress (BDSM, Oral)
Alexia x Sil (Monster, Oral)
Rowan x Draith
Rowan x Cla-Tre & Cla-Owi (Goblin, Titjob)

We disable comments to the public due to high volume of traffic and spam comments, Commenting is only available for VIP members.
4.5 2 votes
Total Game Rating
Subscribe
Please login to comment
5 Comments
Newest
Oldest Most Voted
Inline Feedbacks
View all comments

Game is amazing it as one of the best 2D sex Seen and it as one of the best story i ever read but. it has NTR and I really hate NTR BULLSHIT but this game is different it gives you the choice to have NON-NTR Content this is why I like this game. i my like the game because it has the choice to have a NON-NTR Content but it has so many goblin sex Seens Im tired of seeing goblins what the hell is the story writer doing and shit. son of a bitch has a goblin fetish.… Read more »

Can you update the link because the game has been updated to v0.3.06 android

Hey admin! If you find any mod on this game, please update, this is really a good game.

Gargoyles, The beast and the Bitch [Completed]