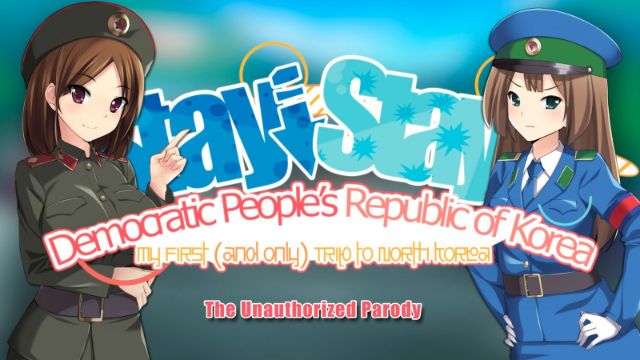 The year is 2021, America is back in Afghanistan, and you, soldier, are about to get a well deserved vacation. What better way to spend it than with some of your Korean Army pen-pals, Jeong and Eunji? “Pyongyang” is just a suburb of Seoul, right? Unfortunately not. Welcome to North Korea. Enjoy your stay.

Try and navigate your way through one of the world’s most tightly controlled dictatorships, with two cute soldiers by your side. Avoid getting shot, executed, black-bagged, or tried for treason as you explore Pyongyang’s most famous tourist attractions.

DETAILS
Stay! Stay! Democratic People’s Republic of Korea will bring all the heart-warming, non-offensive humor you expect from a DEVGRU-P game! In Stay! Stay! DPRK, you will be able to…

Jeong Ending
To get the ending in which Jeong loves you, choose to go on at least 2 of the 3 date locations with her, then once you go on the spa trip to Mount Paektu with Jeong and Eunji, select the following choices during the trip:
-Help Jeong by taking her bag.
-Sit Next to Jeong.
-FIRST!
-Go with the sky blue color.
-70’s Disco
-Wish for Jeong’s happiness.
On day 7, Jeong will make love to you, then you will be drugged, and wake up in an interrogation sort of room where you learn that the Driver was Eunji and Jeong’s father, and that he, Jeong, and Eunji are about to be killed by the NK Military. He has devised a plan to allow you, Jeong, and Eunji to escape North Korea by hiding in a cargo container on a ship. Jeong’s ending causes the 3 of you to end up in Syria.

Eunji Ending
To get the ending in which Eunji loves you, choose to go on at least 2 of the 3 date locations with her, then once you go on the spa trip to Mount Paektu with Jeong and Eunji, select the following choices during the trip:
-Help Eunji by taking her bag.
-Sit next to Eunji
-Ladies first.
-Go with the sky blue color.
-80’s Pop
-Wish for Eunji’s happiness
This ending is simillar to Jeong’s. Eunji will make love to you, and the only difference is that the 3 of you arrive in Albania instead of Syria via cargo ship.

‘Bad’ Ending
“Bad” in quotation marks, because Jeong and Eunji’s endings are subjectively bad. (They cause you to end up in the middle of war-torn countries, but at least there is possibly some sort of chance of getting home to the United States unlike in this ending.)
To get this ending, go on a date with one of the girls 2 of the 3 times, and on the spa trip, you have to choose as neutral as possible, so you need to pick:
-Grab both bags like the macho man you are.
-Sit on the bench like the indecisive wuss you are.
-First!
-Go with the sky blue color
-60’s folk
-Wish not to die on the trip back.
This will cause neither of them to make love to you, and will cause them to both love you, still drug you, but waste time arguing over you thus losing the opportunity to escape via cargo ship. Jeong and Eunji’s dad is still killed, you’re forced to renounce your citizenship to the US, thrown in prison and starved for 2 weeks, then you’re released and are forced to teach English to the NK military and to live with Jeong and Eunji.

Very Bad Ending
The actually bad ending. To get this ending, you need to go on 2-3 dates with one girl, but choose what the other girl likes while on the spa trip.
If you go on 2-3 dates with Eunji, choose:
-Help Jeong with her bags.
-Sit next to Jeong.
-Ladies first.
-Go with the green sand color.
-70’s disco
-Wish for Jeong’s happiness
If you go on 2-3 dates with Jeong, choose:
-Help Eunji with her bags.
-Sit next to Eunji.
-FIRST!
-Go with the sky blue color.
-80’s pop
-Wish for Eunji’s happiness.
This ending will cause you, Eunji, Jeong, and Sumeragi (the drunk woman from the spa) to be tied to posts and killed by a firing squad.