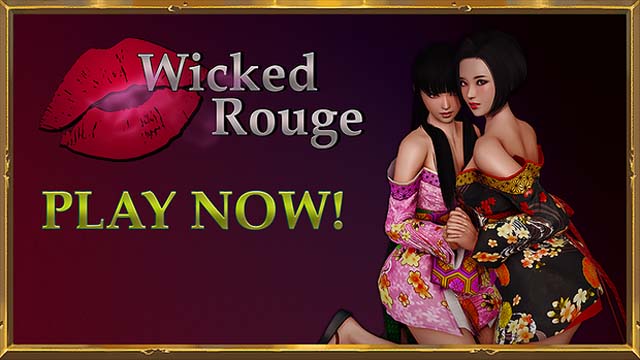 Wicked Rouge APK Android is a story-driven brothel management game set in fictional Edo Japan.
After many years of your carefree life traveling around the country, you return home only to find out that someone has murdered your father and sent assassins after you. Barely avoiding certain death, you’re forced to take over the family business in one of the most recognized pleasure districts in Hana city. However, you realize that your father’s business was struggling and counting its last days before closing the doors, but with the intervention of the local boss-like figure, you’re given a second chance to keep the building. With barely enough money to survive the coming months and a few courtesans in training, you’ve decided to return “The Red Petal” pleasure house to its former glory.​

3DCG interactive world – Manage your business and interact with your surroundings and other characters.
In-depth management simulator – Train your girls, upgrade your brothel, hire staff, keep track of your and courtesans health & energy level.
Progress through the story – Follow the lives of four beautiful courtesans and enjoy the story as it unfolds.
Side activities – Unlock new events by upgrading your building or interacting with various characters all over the world.
Animated busts & scenes – All the scenes are semi-animated to imbue life into the characters instead of showing only static images.
Fully uncensored & animated sex scenes – Lots of beautifully animated sex scenes.
The game crafted with passion & love!

BUGFIX
– Fixed unskippable with the only mouse or touch Kisayo’s regional map dialogues.
– Fixed some eventing progression issues (related to the main story).

v0.3.2
Fixed “images not found” for linux, mac, android
Fixed off-center text in some of the dialogue choices
Other minor fixes not worth mentioning

Small other changes not worth mentioned here.

Small other changes not worth mentioned here.

BUGFIX
– Some instances when mouse not forwarding the messages upon click.
– Party members disappearing after using items in the regional map.
– Regional map beggar row events persist even after completing them.
– Added office book to office.
– Values required to upgrade “Stage”.
– Values required to buy improvement “Stylish hair comb”.
– Hotspring build event if clicked with mouse prompting a UI while Yura massage Saka’s breasts.
– Various issues with management window when upgrading etc.
– Kuni bust not displayed during the donation quest.
– Nekomi not appearing in her room.
– Full-screen mode not saving properly.
– Issues with the “Sacred shrine” map when talking with characters second time.
– VN buttons not showing up after whipping.
– Minor fixes to regional map and skull closet.

BUGFIX
– “Wanderer” and “Pedler” classes crashing the game at the start of “intro”.

Some events require conditions unlocked. Read the changelog for more in-depth information. Proofreading wasn’t applied, things currently are a little bit complicated and I’m in no position to hire additional help currently, but I did my best, hope grammatical errors are not that noticeable.

There was a tiny shift in the writing especially the sex scenes. I still trying to discover my way of writing and the way I realize my scenes. I tried to write them more detailed and hotter, I hope you’ll like them.

Also, I utilized some tricks I learned while animating, small details should be noticeable and I’m sure I’ll be able to bring you even better scenes with time.

Made multiple adjustments and I hope currently the game is more pleasant to play. That includes the separation of “Study” and “Night activities (Lobby & Stage work). Courtesans can study and work simultaneously.

Lots of bugfixes and VIP/End game shouldn’t bug out anymore.

CHANGES
– Fixed grammar up to v0.7.3. Please report any issues.

BUGFIX
– Fixed unskippable with the only mouse or touch Kisayo’s regional map dialogues.
– Fixed some eventing progression issues (related to the main story).