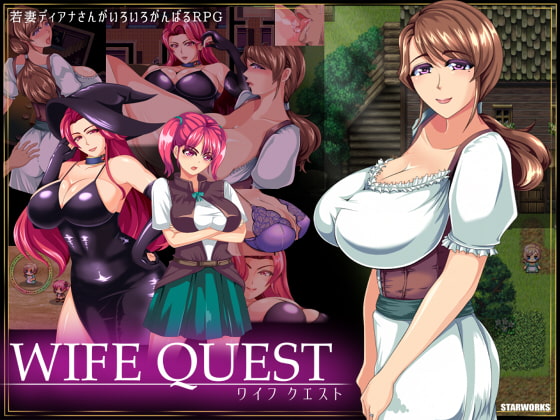 You play as a young wife Diana who’s husband is taken away by the sorceress from previous game to explore dungeons and be corrupted by the sorceress. Diana and her sister left home alone without her husband and when reached helping out and performing quests for him, they being slowly corrupted along with the townsfolk.

STORY
Those who are called brave guards have defeated the demon king, the countries that fought with them, while people are delighted, there are areas that have not been exposed to war and have survived while not knowing the time when the world is at risk.

GAMEPLAY
Standard RPG MV game play, you guide a young married woman Diana through a perilous world on quests assigned by the towns people who corrupt her along her journey. H content can be seen throughout the game depending on the choices you make and situations you end up in. A corruption stat is used to track this and changes how the towns folk interact with Diana. The ending of the game will change determined by the choices you make throughout the game.

・ The arrival point changes greatly
depending on the route (combat opponent also changes, route) after the route finalized by the fighting itself is …… or lost at all)
Happy end there
messages skip / window temporary erase there
, such as system sound, Default from can only change of cool Mv
-reminiscence mode there
– Basic number of sheets: 40 sheets (Ver1.1)

How I Met Your Whore Mother v0.2