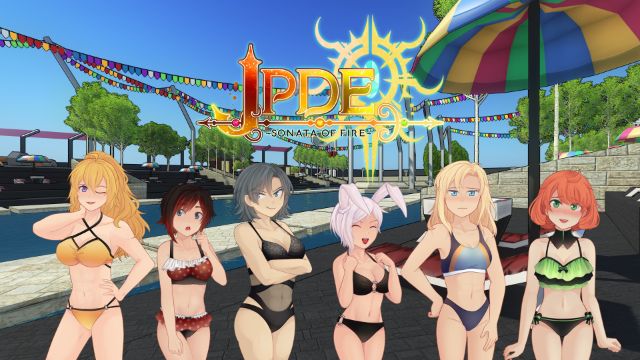 JPDE is a fan-made visual novel created by Meinos Kaen. It is based in the world of RWBY, a popular web series created by Rooster Teeth. You are David di Kabegis, a strange newcomer to the world of Remnant who arrives through meteoric crash landing. Upon first awakening, with a dreadful case of amnesia, he encounters Penny Polendina, and from there, his adventure kicks off as he attends the notable Beacon Academy to train as a Huntsman with combat skills he is unaware of ever obtaining. The team is rounded out by their leader, Jacqueline B. Ivory, and Evelyn “Carrots” Damerot.​

First of all, you may have heard that Patreon has made some… Changes to their company. These changes, and the way they were communicated to the public, left a few not exactly feeling well.

Some of our supporters asked us if there were other ways to support the team since they didn’t feel comfortable with Patreon anymore… Which is why we refurbished and opened a Ko-Fi Page!

Second, we may have already mentioned them in past posts, but we’re adding the profiles of two new team members to the TEAM JPDE Profile page, so let me re-introduce them: MagnificentBeard, who’s taking care of Audio Editing and Voice Acting Direction, and Rasnec, who’s helping with Sonata of Fire’s writing! Hope you will enjoy their work! ^^

WHAT’S NEW IN SONATA OF FIRE 4.17?
Ruby&Yang (1st Event) – This is not the first date Rasnec works on, but it’s the first ‘high-profile’ one, so to speak. Ruby and Yang will have a day out and who knows how it will go…

New and Updated Voice Lines – With the addition of Magnificent Beard to the team, not only are we still adding new voice lines to the game but from now on we’ll be able to fill the game with Emotive Sound Lines and re-work the audio of older voice lines. Playing JPDE – Sonata of Fire will become a completely new experience!

Amber Dreamscape – Neopolitan Episode – And, uhm, for those of you who enjoy… Spicy situations, there’s a new addition, featuring everyone’s favorite double-haired sociopath… Wearing a traditional Ukrainian dress (because of a bet, anyway… SLAVA!)

That’s it for this release! Don’t forget to follow us on Twitter (we’ve passed 1000 followers!) and join the community on Discord. And, boy…

(2022-07-31) v4.16
Hello thar, Meinos Kaen here… BACK FROM VACATIOOOOOOOOON! The members of Team JPDE are going on vacation, each one on their own time. For me, it was from the mid until the end of July.

And now that I’m back, there’s some stuff to do. Starting with this very public release…!

Gwen Darcy (1st Date) – There’s more Team NDGO love coming your way! You may remember Gwen and Octavia being involved in Evelyn’s 2nd date, and now Gwen gets her own character-specific event!

Cinder Fall (Epilogue Add On) – So, you may know that there are certain dates that are called Complementary, aka: they affect and change the ending of the main story even if the character involved isn’t brought to the date… Cinder Fall is one of these. I’d suggest running the epilogue again…

New Outfits – As you can see from the above picture, this update includes a new casual outfit for Blake and the Beacon Uniform outfit for Weiss! Which means that now, there’s only one member of team RWBY without her uniform…!

New Voice Lines – Evelyn and Penny get more voice-acted lines added to the game in this update! Thanks to the efforts of Magnificent Beard, a new member of the JPDE team who will be dealing exclusively with the voice-acting!

That’s it for this release! Don’t forget to follow us on Twitter (we’ve passed 1000 followers!) and join the community on Discord. And maybe follow the team here on Itch because, in case you hadn’t seen it on our Patreon already, there’s a brand new game coming your way…

(2022-06-05) v4.15.1
Damn, guys. Today has been raining cats and dogs, but the weather says that tomorrow it’s going to be puuurfect. Other than that though, I had my family come visit from Italy and it was a nice long weekend so I’m feeeling quite feline! ;D

HEY COME BACK! JEEZ, ONE CAN’T MAKE A COUPLE CAT PUNS WITHOUT FEELING JUDGED! I just wanted to make a little intro… >.>

WHAT’S NEW IN SONATA OF FIRE 4.15?
Because, if the previous release was about Chocolate, this one is all about cats! Well, cat ladies, to be fair! Because, what you get this month is…!

Neon Katt (1st Date Rewrite/Upgrade) – Once again, Rasnec helped write this and he’s coming into his own! Thanks to his ideas, I’m happy to say that Neon’s first date has been rewritten and from now on Neon Katt’s Route is Complementary, as mentioned Discord. That means that, just like Pyrrha’s and Neo’s routes, they will count as valid if you bring it to a certain number of dates and will affect the ending no matter who you bring to the dance!

Blake Belladonna (Sprite Update) – And speaking of dancing, may I remind everyone that Blake Belladonna won the latest Battle Royale on Patreon. Which means that this summer you’re getting her dance event and custom event. Also, we upgraded her base sprite… And a sneak peek of her dance dress.

…wait a minute, that third one is NOT in the game files this month! Where did it come from? Also, how many ribbons does she have?! O_O

And finally, the biggest update for this month might be that JPDE and CBLT (another RWBY fan-game with which we had, ahem, history) are now on good terms again and are thus collaborating! Check out CBLT’s latest release here!

That’s it for this month! Please remember to also follow us on our newly upgraded Twitter as we come closer and closer to JPDE2’s first public release!

WHAT’S NEW IN SONATA OF FIRE 4.14.1?
Ciel Soleil (2nd Date) – First of all, because Ciel got her 2nd date! Which is also the first date written in collaboration with Rasnec! People from our Discord know him as one of our admins, from today is a writer on the JPDE team ;D

Emerald Sustrai (4th Date) – Then, we have Emerald Sustrai’s 4th and final date! Which means that she’s now eligible for her custom date and special ending! By the way, did I mention that this month we’re having another vote for the next custom ending on Patreon?

Amber’s Dreamscape – And finally, Amber opens for us a new kind of -ahem- night-time activity. With this new release, we inaugurate a completely new kind of lewd! Completely new in how you access it in-game but also completely new as in the… Presentation.  You’ll see once you get there.

Russian Language Support – You can now switch from English to Russian without needing to download a totally separate version!

That’s all for this month! I invite you to follow us on Twitter as well, and, again: this month Patrons will decide on the next custom ending!

Penny and Ruby 1st Date – The doltz have their first event together! This includes, as always, a CG piece!

And next month… Oh boy >:3 Hope you’ve been following our Discord or Twitter, because while Patreon is the place where to find out the State of J.P.D.E. projects and nominate what comes next in them, for ToS reasons, the more adult-only stuff is to be discussed elsewhere, as the Discord goers have recently been discussing…

Before leaving you, I wanted to remind you all: Patreon doesn’t allow me to put a cap on how much money you can give the team -which is kind of insane- so I want to remind you that at the end of the day, no matter how much you love our work, these are still videogames, and your hard earned money should go towards bettering your life first.

I appreciate your support but I ask you try and keep the pledge around the level of the Tier, or if you really want to give us extra, stop at 100$.

With that said, I hope you enjoy this update! I’ll see you next month!

Is there any walkthrough for this game?

Descendants of the Goddess v0.3c