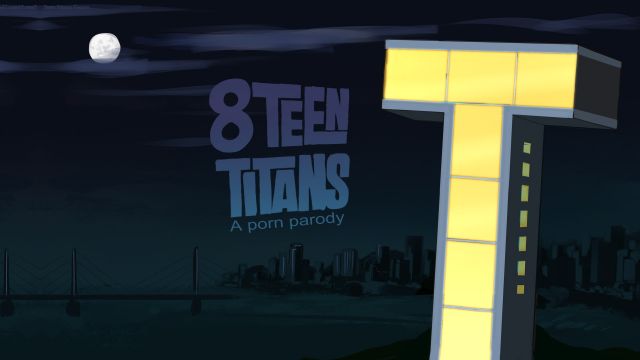 The Teen Titans are young superheroes fighting crime under leadership of Robin,
Unknown to the other Titans, Their team leader Robin was abducted by Slade, one of their most dangerous enemies
After restraining him, Slade take a syringe and inject something into Robins veins accompanied by a cryptic message​

v1.1.9 – Bughunt
Summary of additions to this build (spoilers)
Cyborg will finally crack the info you got from the Sladebot. This part will end on a very big cliffhanger. The end is very clear so unlike the last time you won’t wonder whether it continues in this build.
You can take Terra on a second date. That date won’t end without problems. Problems which will have you decided whether you’re going to take jinx with you afterwards to Teen Tower. There will be a simple tickle scene with her if you do.
There will be a scene with Terra and Starfire with part of you in between them. Beast Girl can play along when some conditions are met.
You can catch Terra and Starfire in the bathroom washing each others’ back after you choose to come outside during the previous scene.
Beast Girl will have a reverse cowgirl scene and a small beejay as part of the cowgirl scene… just to be clear no, she won’t turn into a cow
The other parts of Raven’s psyche in the hand mirror will want some attention from you after you’ve met and gave some to Red Raven.
Cyborg will finally find a place to park his third leg with Bumblebee’s help!
You can replay the Bumblebee scene where she goes “spelunking”.
You can find a pornmag but it’s not actually there yet to see. I haven’t even started sketching it so all you can do is find it. Either by winning a fight or snooping around someone else’s room.
Red Raven will have a pussy scene, but that’s pretty much the same as the other differently colored Ravens.
And I think that’s about it.

v1.1.7
In this build you’ll be able to get a blojo from Terra(Starfire will come and help) and the second time will be slightly different. The Sladebot will be rebooted(partly). You can have vaginal sex with her and move her to the mc’s room.
Bumblebee will come around to help out with the Sladebot and you’ll be able to see her in the bathroom afterwards.
Blackfire will be able to get some bumfun in the holding cell. Of course you can invite Starfire to watch and she’ll do what she threatened Blackfire with the last time. Rhymes “with kiss in her face”.
Terra can also come along when you visit Jinx from now on. Just like Starfire she can Kiss jinx in her face during the vaginal sex scene and she has some small things to say during the other jinx scenes.
And finally you can look into Raven’s hand mirror which you could already see in her room during the last build. Just a little warning, Some of you might expect a full on orgy here. That would be nice eventually, but it’s not there yet. Instead there will be butt fun with Raven… sort of… You’ll meet Raven’s dad… also sort of… It’ll make sense once you see it.
Oh and finally, there will be a new poster for the mc’s room which you can buy from Yhads.

v1.1.5
There will be a new scene with Pantha if you win from her during a fight.
Blackfire will have a new scene in the holding cell, but don’t forget you’ll have to have come inside her during the earlier scene before that unlocks. You can of course take Firestar along for a slightly different ending of that scene.
Jinx will also have a new scene in the holding cell. It will only be unlocked when something happens elsewhere first. The earlier scene for that is not required.
You can take Terra on a date and Raven can be taken on another date too. I’d suggest to go with Terra first.
Things happen, Chu-hui will call you again and you’ll fight two new enemies.
You can search and find the three parts Cyborg needs to put together a working Sladebot(but that’s as far as things go).
And finally there’s a vaginal scene with Raven.

v1.1.4
Edit: 1.1.4 fixes Batarangs not properly working in 1.1.3 (only the batarangs)
Hey all, a few people were getting stuck in Teen Tower immediately after Raven’s date. At first I had no idea how that could happen, but then I noticed you could take Raven out on a date during the day which is what caused the progress lock.
I removed that bug and added some retroactive fixes. So if you are one of the few people who couldn’t progress pass that point, it shouldn’t be a problem anymore in this version.
Ps, if you can visit Pantha and lose to her(thus forcing night to occur) you can also bypass the bug without needing to download this version.
I also took the opportunity to fix a few graphical glitches and add some dialogue during battles when you can’t use items against certain enemies(this introduced a new bug with the Batarangs which is why 1.1.4 was needed!)

v1.1.2:
Hey all, if you’ve already played 18Titans v1.1.1 and experienced no problems there is no pressing reason to download this version.
Version 1.1.1 was a hotfix for a bug involving Beast Boy, but if you already played 1.1.0 you might still be suffering from the effects of that bug even in 1.1.1. Basically, Beast Boy’s gender became messed up and among other things, locked you out of the possibility to turn him into a girl.
This latest version is supposed to clear up the remnants of that bug if you already “stepped into it”, but like I said, if you never played 1.1.0 you shouldn’t experience those problems to begin with.
Here’s hoping nothing else too serious pops up, but if so, you can let me know in the comments or send me a dm.

18Titans 1.0.9 – Bughunt
Hey all! It’s been a while since 18Titans was on the menu, but Raven is finally getting her date and Terra is also getting something… A new forceful female character will make her appearance as well as other stuff, but I’ll write up a slightly more detailed description below. Let’s have some links first!

This build is pretty much as far as I managed to get this month(while still being late) and there will be a moment where you might lament that fact. You’ll be fighting an enemy and won’t be able to claim your prize for winning that fight. That’s not a bug. I just didn’t make it that far.
As always, if you find any sort of bug or other things you’d like to bring to my attention, you can write a comment below or send me a dm. Both are equally helpful and appreciated!

– Spoiler log –
Now for the spoilers. Jinx will have a new scene if you captured her and finished the earlier scenes at least once. This will eventually end up in a scene with three dicks(if you’ve seen Cyborg’s nightly visitor ) and one Jinx. Those three holes in the glass wall weren’t a coinky-dinky! Her resistance will be lowered to 10 afterwards.
Blackfire DOES NOT have a new scene, but her resistance will be lowered to 10 if you ejaculate inside of her in this version. That will be important for future versions.
A new character will be introduced, called Pantha. Winning from her in a match will yield a reward in the form of a vaginal scene with her. She’ll teach you a new move which currently(?) only applies when fighting her.
Terra will spread her legs. At first just to receive coconut milk on the outside. In a later scene you get to choose where.
Raven will get her date and the mc will get a blow/licky job.
After Raven’s new scene, and going to bed, you’ll get a call from Kitten and can use the telescope to fight a new enemy the next day. This is the fight where you can’t claim your prize if you win.
You’ll fight a new mysterious enemy!
And that’s about it for this version.
Like I said, whatever feedback you have, I’ll gladly receive/read it and hopefully use it to make a better version in the future. Thanks and I hope you’ll like this version’s new additions.

ps. I’ll start putting together a new FET art assets update now which will have scenes from FET’s last update.

– You can get a simple boob/handjob from Raven(That’s all that’s new for her in this version).

– Beast Boy/Girl will get a moped/money and you get something in return from her!

– Jinx will do something with a certain thing being pushed through a hole in a wall. Beast Boy can be invited as well!

– Blackfire gets to have extra nutrients, in either her mouth or her uterus. As always, Starfire can come along to watch.

– Terra becomes a part of the Titans and gets her Titan outfit. Slade gets to show off his new idle for the first time.

– The MC learns a new technique to deal a bit more damage and increase his defense.

– Yhads is selling a new poster.

I’ve added “under construction” signs here and there and some tidbits aren’t mentioned, but if you’ve seen all the scenes which I mentioned above you’ll have reached the end of the new content.

v1.0.5
Hey guys, here’s a short summary of what I added since version 1.0.3 to help you know when you’ve seen all the new stuff.

My suggestion is to first play the this version normally and afterwards see if you missed something.
Naturally there will be a bit of spoilerage going on here, but I’ll try and keep it vague.

This build is more of a “setup build” where I put smaller pieces into place for the next build.
That means there’ll be less hardcore sex scenes than you saw during the first build.

Blackfire – You can give her four orders in total.

Jinx – You can give her one more order.

Beast girl has a total of four smaller girl scenes. When you reach 4/4 you’ll reach an “under construction” – sign. Can be totally avoided if
you’re boner doesn’t get confused and is just like “NO. Nonono.”

Kitten – You can meet her and her dad.

Terra – Nothing… okay, just a preview of her non naked body.

Bumblebee – A poster, you can also buy a Terra poster now from Yhads if you didn’t get one from Beast boy earlier.

Raven – You get to fight/kiss/slap her bottom/see her nude etc. You’ll reach an “under construction” – sign when you run out of her options at night.

The batarangs for Robin are cheaper and a bit more powerful.
There’s a new enemy which is also pretty weak like Doctor Light and can help you get stronger more easily.

If you find bugs and/or have other feedback, you can tell me in the comments or if you want, simply send me a pm. it’s all good!
Thanks and I hope you’ll have some fun with this build!

v1.0.2
Early access version so expect a lot of bugs