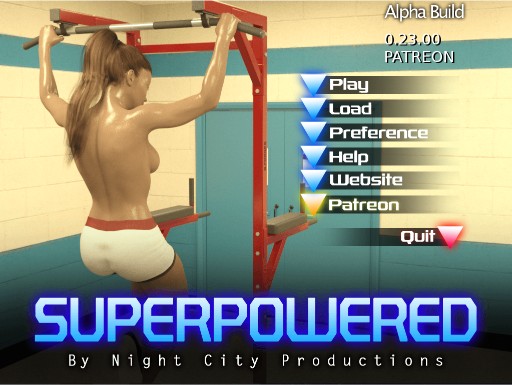 SuperPowered is a RPG game made with Ren’py. In the game, you play as Billy, a young man still living with his mom. At the very beginning of the game, Maggie (his mother) buys Billy his first superpower. Because money is tight, he doesn’t have much of a choice, she’s getting him X-ray vision. Before the process begin, the nurse who’s gonna give him the shot has to test him to see if he’s compatible. As it turns out, he is but there’s something else. Unlike most people, who can only receive a very limited number of those shots, Billy seems to have the uncanny ability to absorb an unlimited amount of them. Thanks to this, he could become the most powerful of them all but in order to achieve this level of power, he must be careful. In a world where almost everyone can buy powers, anyone could be a potential threat.

What it means?
it’s all pretty self explanitory

Side Note:
I added almost 200 full scene renders this update (that’s a lot, I normally don’t do more than 150), because Terri’s unstable scenes had a lot of meat in them, so I’ve pushed her Fetish off to the next month that I’m not developing Chelsea.

New Character: SuLynn – You can find her at the College. – this includes

New Power: Kinesis – The main toolkit, for a mental combatant.

v0.39.00
It’s taken a little longer than originally planned, but’s finally out. I went a little ham with the rendering, and extended the storyline a bit. This one storyline is approximately 20% of the entire NCHDL storyline content, which includes recruiting all the characters, and all the other plotlines…So it’s a biggun.
Anywho…

What’s in it?
The conclusion of the NCHDL story.
A new Jealousy scene between Stephanie and Maggie.
Billy Jean versions of most Public Ops if you have the polymorph ability to shift genders.

Some rebalancing of Global Reputation. It’s now worth twice as much as it used to be. It costs 250 global reputation rather than 500 for letters of recommendation, and this halving of costs has been done across the board.

Well technically…there’s some new mechanics, such as unpowered combat, 2 new enemies (enemies are people you punch for profit and fun), a new combat location, and a fairly hefty reward for all your hard work in the NCHDL. But…that’s all in service to the conclussion of the story. There are some small scenes left to make afterwards which I plan to do in one of the following updates.

What’s it mean?
Sister perk has changed to Good Brother perk. – Stephanie is now a permanant figure in the game. With the perk she’s stays at home, and goes to school as normal. Without it, she spends the school year in boarding school, and only visits during school breaks.
Yearly school schedule introduced. – There is now a winter, spring, and summer break from school. During these breaks, your grades do not matter, and you won’t be penalized for bad grades. Your grades also won’t decay, so it’s a good time to get your grades up
Graduation – This is a giant scene. I mean Giant. There are 18 seperate scenes all crammed into this thing. I wanted the end of NCH to be hefty and that’s what I got.
Chelsea variant for Nikki’s Fetish added (Additional Content) – This has been planned for a while, but I made Nikki before Chelsea, and saw no point in adding Chelsea at the time, since you wouldn’t be able to see the scene for another couple characters. And then there was just never enough time to make the scene. Well…one of our $30 Patrons made time for us
Freddy, Samantha, Allie variants for studying in the library if unlocked through NCHDL quests (Additional Content) – Another thing I had cooking in the background but never enough time to focus on. If you’ve ever noticed Samantha and/or Allie flirting with Freddy in your game…you can watch thier relationship develop passively by studying in the library.
Terri joining in with Mary invite over scene if both characters fetishes are unlocked (Additional Content) – Can’t spell twins without win. Inviting Mary over will give you a new option if both Mary and Terri’s fetish is unlocked.
That’s it?
Yep…With 250+ Full renders, and something like 18000 words of dialogue, I can safely say that even though this update is short in terms of moving the needle forward storywise. On the backend it’s huge since I’ve begun coding for a game outside the school. Which is where most of the game should eventually take place. I forced a lot of structure on the player early on, so that the player could at learn how to progress in the game, but with the school graduation, the training wheels are coming off. (Eventually…for now the school will still exist during breaks since there’s no other way to make money besides work at the school.)
On a side note…I fought some of the worst insomnia I’ve had in years this last month. I really appreciate everyones patience with this release. The next release (Nurse Anne pt.1) will be out much faster.

We disable comments to the public due to high volume of traffic and spam comments, Commenting is only available for VIP members.
0 0 votes
Total Game Rating
Subscribe
Please login to comment
11 Comments
Newest
Oldest Most Voted
Inline Feedbacks
View all comments

Is there going to be and update?

I followed video and app will not open and automatically stops.

make sure you put the file in internal storage

This game has no cache. Do I need to do the same ? Thanks

The game can’t start . I have downloaded the zip file and extracted with winrar. Then I install the apk file. Did I do anything wrong ?

Where do you place the obb file?

outside, dont put inside of any folder