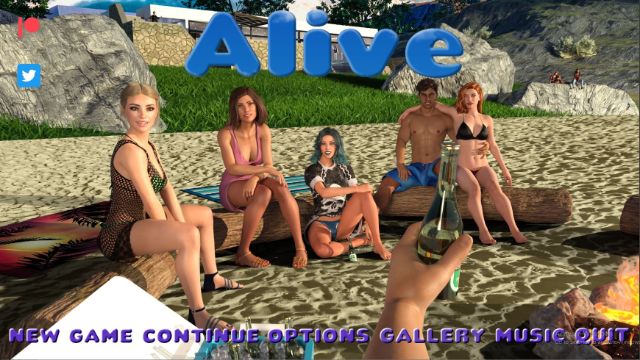 You’ve lost your job, but that’s ok you work too hard anyway. You’ve lead a pretty boring life so far, so many this is the perfect opportunity to change things up, and feel what it means to be Alive.​

v0.6
Chapter 6 changelog:
Full change/update log:
Chapter 6 – Continuation of the story! Chapter 6 contains around ~950 static renders, and over 30 animations.
– added a new minigame. As always if you’ve opted out previously it will play out a bit differently. The minigame is intentionally extremely easy – I may adjust the difficulty at some point to be a bit harder but I decided to leave it as relative easy-mode for now.
– Fixed a bunch of typos. Probably added a few more.
– 13 new music tracks as well. Chapter 5 had a ton, less so in CH6 since many of the chapter 5 ones still fit very well. Expect some new stuff for chapter 7.
– Re-did entire android build for compression purposes. Android apks have an effective max size of 2gb – redid compression on most images and sound. Chapter 6 android release is about 1.1gb. (For reference Ch5 was 1.7gb). There may be a very slight loss in quality, but hopefully it’s not too much. I’d love some feedback on this if anyone plays android versions.
– Added a couple of shoutouts…. at least 1 more is planned already for CH7. (I bet you know who you are.)
– Created at least 3 new bugs I haven’t discovered in all my playtesting… or maybe not. But Probably. (Spoiler alert: I did, and I’ve fixed at least 3 already! Hopefully it was only the 3!)
A few major notes:
As of today you may notice Alive carries a price tag. In the past new releases have always done so, while old ones remain free. To combat issues I’ve had with itch and the payment system, moving forward Alive is becoming a paid project, with a free demo available (Which is up to chapter 5.)

– Fixed a bajillion typos in the early game.
Probably created new ones for Ch5.
(And already fixed a few thanks to a couple proofreaders
and bug testers for your help!)

– Added a pre-game warning about the existence of potential scenes of a violent nature.

– Added (TWO!) optional textboxes. For now they’re mostly placeholders and if I can
I’ll improve the look in future updates, but they were the best I could do on short notice.
Also added an optional slider for textbox opacity!
Head into the options menu where you’ll find new options to choose your textbox
and set your preferred opacity level.

– Made a few changes to the choice menu that pops up periodically.
Two main changes are: It has been moved up slightly on the screen,
and now larger menus have a scrollbar allowing you to scroll through the menu.
Not very relevant now as the only menu I know of that might scroll off screen
has multiple disabled options, but may become relevant in future updates.

-Fixed some small errors causing certain scenes to load twice
(And in one case an early animation scene wouldn’t play).
It all works now!

– Fixed a possible softlock if minigames were enabled.
No more infinite loops!

– Fixed a few bugs that no one probably even noticed. Now you never will!
Most likely introduced at least two new ones as well!

v0.4
– Added Ch4. Duh. Ch4 consists of approximately 700 new images, and ~22 new animated scenes. (It’s actually 27, but 5 don’t really count). Also 17 new music tracks.
– Added a small display when you play minigames – now before you choose your workout routine, you’ll be able to see your current stats in the top left corner of the screen. I plan on adding a full stats screen that will likely also contain RP values (Maybe some other stuff? idk yet) in the next release, but for now the minigame stat screen should suffice.
-Fixed a TON of rollback issues related to minigames. You still can’t rollback in the middle of the workout minigame, but all other times it should work fine now. Not applicable if you disable minigames.
– Added a new minigame! This one isn’t repeatable like the last, and it’s only available on one path, but it was fun building it, so it’s there. There’s no tutorial for this one, but it’s pretty self-explanatory and doesn’t actually mean too much except for a slightly different scene (and possibly a hint about the future).
– Addressed a number of other very tiny bugs I came across from old versions. Most should be fixed now. (I make no promises that new ones weren’t created in the process.)
-Ch4 includes a number of text messages, much like previous chapters. Unlike previous chapters, the phone opens automatically throughout chapter 4. Moving forward there will be a mix of both behaviors. Sometimes the phone will open automatically – other times you will need to interact with it, depending on the situation. Interactions from Ch1-3 have been left as-is.

v0.3
– added a save screen at end of chapter.
– made a few behind the scene changes – any old saves won’t work because I had to do this. I now know why I had to do this so I won’t have to do it again. (Bonus, I’ve figured out how to retroactively fix it if issues pop up again later).
– added chapter 3. duh.
– redid a bunch of behind the scenes stuff to make pushing updates easier, so from ch4 on I’ll be able to make an update only version available (since it’ll exceed 1gb in size by then).

v0.2
You can opt out of minigames entirely. (Requires starting a new game. In fact starting a new game is highly recommended. I’m going to attempt to not make any changes that necessitate this going forward, but for this one it seemed necessary.)
Made a few changes to earlier scenes (Particularly you can opt out of Gaby at the bar now). Re-did some of the earlier images that bugged me.
Added an android release. Largely untested (Bluestacks only) so lmk if there’s any issues. As always, check my twitter or patreon for progress and updates – including some upcoming news shortly after the holiday break.

v0.1 Fix
Adjusted background color on intro text (Age verification, Name entry, etc)
Fixed phone scrolling when choices are available – you should now be able to freely scroll through the window if it doesn’t do it automatically.
Added warning that minigames exist, and how to skip them.
Also fixed some typos. If anyone finds any, point them out immediately pls. Typos is a pet peeve of mine, and I really want to squash those asap.

Having a HARD Time [Episode 1]