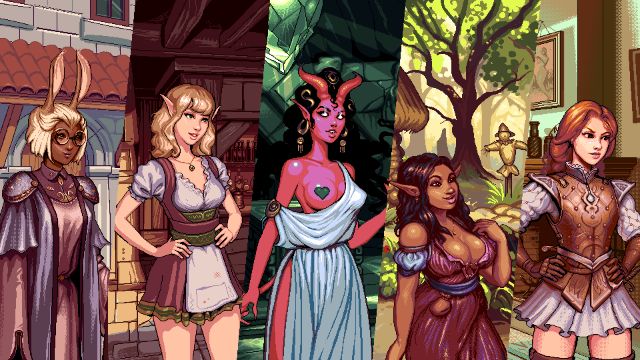 In this adventure game, you’ll take the role of a young adventurer who returns to his childhood village to reclaim a house inherited by his grandfather.
On a sudden twist of fate, you find a mystical amulet in your newly acquired house, and its simple touch puts in motion a chain of events that will lead you to meet a mysterious woman who has sought refuge in your home.

Retro pixel art! Full of nostalgia and style.
Explore a world full of wonder! With plenty of exotic races, exciting characters, and mystical encounters.
Many stories to unfold! +8 Unique characters, with their traits, personality, backgrounds.
RPG Mechanics! Level up, improve your stats, equip artifacts, drink potions, and slay monsters.
Lots of things to do! Relax while fishing, play blackjack, craft some potions, take care of your magical garden, delve into the dungeon, serve at the bar, chop wood
For the completionists! +80 achievements, which will not only give you a sense of pride and accomplishment but also reward you with extra scenes!

Fixed the dungeon Spell Statues not displaying a description.
Fixed the [Hex Box] sold by Soran displaying an incorrect price of 2000.

v0.24.2
What’s new?
Scene for Luna/Ki-ki
Scene for Ivy/Scarlet
They’ll be indicated by a heart in their specific locations.
There’s no way to replay them at the moment (other than loading back), as I’m working on a new system to integrate those scenes in.
Hotfix .2
Fixed an issue that made accessing Ivy’s room after the EXTRA SCENE crash the game.
Fixed some dialogues.

With that said, we do encourage starting a new save this time to enjoy the new mechanics. For that purpose we added:

2. “Will the dungeon be expanded in the future?”

3. “Will that dungeon expansion include scenes with the enemies?”

4. The entire dialogue system code was reworked to allow for future translations of the game.

So there will likely be some dialogue issues (misnamed characters/cut lines), but the core of the game and progression should be unaffected.

If you see any of those issues, feel free to report it to us.

5. We decided to delay some optional stuff like the new achievements, so the build could be out sooner. We will add those in a hotfix as soon as we can.

With all that said, sorry if this build took quite a long time compared to others.

Now that all these changes are out of the way, we should be able to push builds after this one faster, and more reliably.

Now for the juicy stuff.

Important: It’s likely that the test tool we left in the bedroom (small portrait at the right of the clock) causes sequence breakers and crashes.

You can go to cheats and write “DUORESET”, that should reset and clean the duo section of Ivy/Scarlet quest-line and get rid of any problems caused by the test tool.

Android Installation: If you download the .apk, please make sure that the filename hasn’t changed after the download, some phones change the extension to .zip for security. If that’s the case, change it back to .apk and install. If this doesn’t work, try using a different file manager to open the file.

v0.19.1 Hotfix
Added Ki-ki’s and Luna’s first scenes to the Journal.
EXTRA ART added to the achievements gallery.
Fixed the “reached X level” achievements not triggering if you surpased that level beyond their introduction.
Dungeon enemies have now a chance of dropping items once defeated.
Fixed a crash triggering in the GAME TIPS submenu.
Bugfixed some dialogue issues.
Very slightly improved file size.

Dev Notes: There’s no Naamu clues at the moment, to progress through the new content go into Janet’s store at the mornings. (As long as you had completed both Janet’s and Crystal’s questlines)
All the items required can be found in the dungeon (all can be found before floor 14).

Some scenes are not available through the Journal and will be added shortly in a hotfix.

Android Installation: If you download the .apk, please make sure that the filename hasn’t changed after the download, some phones change the extension to .zip for security. If that’s the case change it back to .apk and install. If this doesn’t work, try using a different file manager to open the file.

Many artifacts seemed to be direct upgrades from others or do specific tasks better than their peers, for this update we tried to give each artifact more concise mechanics that bring different gameplay styles to the table.