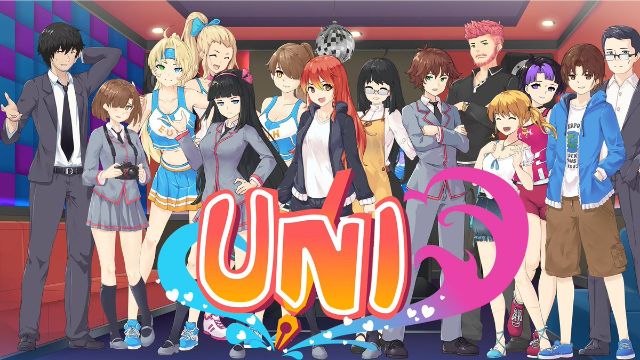 Uni it’s the name of the city that the game takes place in and you play as a female protagonist, a girl whose fate is entirely up to you. Much like a date-sim game, you’ll attend school, walk around, take on a job, etc etc. As this game goes on you’ll be able to put her in different situations and experience different storylines.​

Planned fetishes include (Open to change): Mind Break, Transformation, NTR (Avoidable), Rape and even an interesting healslutting event branch that was proposed with the game console.”

v0.41.100:
-The Giraffe tongue during the Kate Zoo date is now the correct color.
-Small fixes to all of Violet’s Car CG scenes. (Seatbelt placement and small details)
-Small fix to the homework bullies to prevent them from showing up too early.
-Cheer Practice CG Scene Fix (Chelsea’s hair is now in a ponytail.)
-Cheer CG with Coach Clayton has been fixed to include Chelsea’s ponytail.
-Cheer CG with Damien under the bleachers has been remade.
-Ryan is now much more expressive (Additional Expressions added)
-Removed the Stats Screen when using the laptop to prevent errors.
-Fixed Stripclub event progression.
-Fixed Matt Blackmail Bad Ending from not triggering in certain scenes.
-Added an additional dialog branch in the case that you did not play S&M (Swords and Magic) with Levi the first time.
-Added Basic Mod Support (Example mod can be found in the mods folder. Modding Guide to come later.)
-Added Fancy Restaurant Background to Violets dates.
-Added Track Meet Background for Track Meet events.
-Added a Violet CG Scene when you’re putting on the blue dress.
-Added a Violet CG Scene when you’re on the way back from the restaurant.
-Added larger tips in both Cafe and Bar.
-Increased final Bakery payout.
-Added Matt Lending CG Scene.
-“Blowing” rent now gives corruption for doing so.
-Tracy now has toes in her Bikini outfit.

0.36.95b
-Fixed a missing comma in the event triggers causing errors.

This patch adds in the final CG Scene that was in the works for 0.35.94 and fixes a couple of bugs that we didn’t get too during the development of 0.35.94.
A few more are on the list, but they were pretty minor and time was out for getting this patch out to start work on 0.36.

Lots of bug fixes coming in this update as you can see with some new club content coming your way featuring scenes that will have the first club CG Scenes.
This update is missing a CG Scene in fact due to a small mishap on my part with the colors in the CG Scene it should be fix pretty quickly and we’ll have it in a hotfix that will be coming in a few more days that will fix a few more bugs that we couldn’t get to.
Anyway let’s get into it!

Artwork:
One of the multiple CGs coming to the Aquarium date that you and Damien go on, with this featuring the sea turtles that you have the option on going to see. A small wholesome CG scene for you Damien-lovers.
Included is the CG Scene for the Matt-Mafia event where you find him in the warehouse finishing off that new event chain in earnest without the addition of the mafia guy sprites that will be coming later on.

Technical:
All of your bug reports have played a big role in them getting squashed this update, so thank you to all of those that had reached out to us on discord or through the use of the in-game bug reporting system.
This update should fix the bigger problems with events overlapping, Matt remaining after the mafia favor, the mafia taking him out without your intervention, and a Violet Dom event trigger fuck up.

-Fixed the Stripclub and Farmers Market Event Chances
Two Damien Text Events making the phone get stuck
-Windows7 Fix?
Just those three small things. The strip club and farmers market event chance to trigger was set to 99% from when I was testing out the event progression and I had forgotten to set it back to something a bit more tame.
As for Damien there are two texting events with him that don’t “clear” the phone so it was causing the phone to get stuck until you went to another phase of the game.

Now, I’ve made sure to remove all the icons for the windows 7 version as that is what fixed it in the last version. We don’t have a way to test this version ourselves so if it still broken for any of you please contact us on Discord so that we can find a solution.

Don’t forget that 0.29 is now available to $3+ Patrons!
It’s that time again everyone! Another update has been released with plenty of changes and fixes! Let’s get into the details of those changes shall we?

Writing:
There was quite a bit of writing this month adding on 2 new events to each club and finishing off the Farmers Market and Strip Club walk around event chains bringing all the current walk around events to an end! Quite the milestone indeed, and makes way for new walk around events to begin to develop once we’ve brought everything else up to route lock.
Adding onto all these new events is some fun extra dialog if you name your character the same name as Kate or Violet. Nothing too significant, but now they’ll recognize it.

Artwork:
Not as much as usual, but these are some lengthy scenes that have been fun to work with and more on the way next month as we begin to work more on new backgrounds for various areas during events. For all you Violet fans out there I’m sure you’ll enjoy the new scenes being brought with this month.

Technical:
The old bug report button was in a pretty terrible place, but now all that has changed as you now you can report any bugs that you come across directly from the in-game phone, which will take you to our bug report form that you can fill out telling us about any slip ups you may find!
Of course with each update comes new bug fixes all around with the more significant ones finding their way onto the changelog. Added in some sprites that were missing of the appearance that Lisa makes during one of Kate’s date events, and one of Levi’s events that had his sprite missing from it as well.

Other:
That about concludes the what’s new post for this release. I have quite a bit more to talk about, but I think that would be best left for the Plans post coming up in a few days if this version decides that it wants to cooperate for once. If you doesn’t just contact us in the discord or comment it below.

v0.29.86c
It’s here and ready to be played with a bunch of new images and fixes.
Updated support for 32bit systems and patched to 0.29.86c.
Update2: If you’re on windows 7, download the windows 7 version.

Artwork:
We have two large CG Scenes coming in this update, including a few others. First being the Dinner Date CG Scene, which some of you got a glimpse of during the stream a few days ago as we were fixing bugs in the game, this scene progresses across the dinner date that you have with Submissive Violet.
Next up is the Violet Submissive variant of the Violet Dominant scene in the bedroom that you have so that gives you an idea of what to expect with this CG Scene.
We also have the new Kate Selfie CG that appears in a texting event when texting Kate, that many of you may have seen already, but it definitely embodies the cuteness factor of Kate.
Lastly during Violets Sub route Violet gives you a new dress to where to the fancy restaurant she takes you out to; this gets added to Chelsea’s wardrobe after the date so don’t worry about having it as a one event thing.

Writing:
With the stripclub writing being pushed into the 0.30 update, and the Violet writing on hold for the moment there is not a lot of writing in this update as you can imagine, but there have been dialog changes and edits all around the game. One such instance is with during the catcall events where one of the events has a rather extreme outcome has been changed to be a bit more tame and make more sense for the situation. Other additions are new dialog that appear due to other conditions such as owning the cat or encountering the Alley scene with Alex and Matt.

Technical:
A lot has been done on this front with this update, mainly reinstating the new gallery, which will look mostly the same to you with a new “Extra” category for backgrounds and other images. Largely the overhaul is under the hood with how the gallery functions so that we will longer run into complications in the future. There has been a hint of lag when switching through categories so let us know if this becomes severe for you at all.
Taking another deeper look at the stripclub event chain we found a few more problems with it’s triggers and have cleaned up those problems so any previous problems you may have had with it should now be fixed.
The chances for people to respond to your text have been increased, now they shouldn’t ghost you as much. Also should note that if a character doesn’t respond multiple times it’s either there are no more events or you haven’t progressed down their route far enough to unlock any new ones.
There’s plenty of other small fixes across the board like repositioning sprites, adding missing periods, changing how many acts a certain event will use, etc.

When’s the next update coming