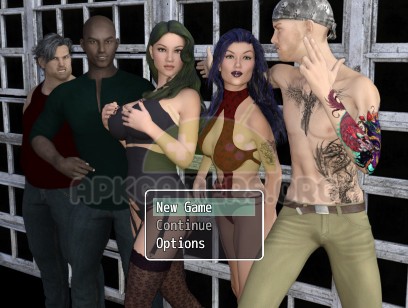 As you might imagine from the title of the game, the story revolves around our main character Kristi. Kristi is an 18 year-old girl, that lives in the suburbs of Hardersfield with her father. Her mother died when she was just 13 years old under weird circumstances. Being the daughter of drug users, from a young age she had been touched by the darker side of this world.

After finding herself at a dead-end due to her father’s abusive behavior, she decided to run away from that toxic house to search and reveal the truth behind her mother’s death. This change in her life had an effect socially and mentally.

New people became part of her life and influenced her in various ways.
At this point, some of the characters involved in her life include:

Bob: The sexist and dominant boss who tries to take advantage of Kristi in any way he can.
Silvie: One of her best ”friends” and an ambivalent character of this story.
John: Also a friend of Kristi who is trying to help her but sometimes cannot control his urges.
Petko: Someone in deep within the world of drugs. He will appear in future versions and play a main role in Kristi’s life.

We disable comments to the public due to high volume of traffic and spam comments, Commenting is only available for VIP members.
0 0 votes
Total Game Rating
Subscribe
Please login to comment
4 Comments
Newest
Oldest Most Voted
Inline Feedbacks
View all comments

How to upload the screen shot

I got a image loading error in DJ and the girl scouts in bathroom for taking the keys and the game has strucked.how to overcome the problem please tell me someone

please screenshot so that we can fix