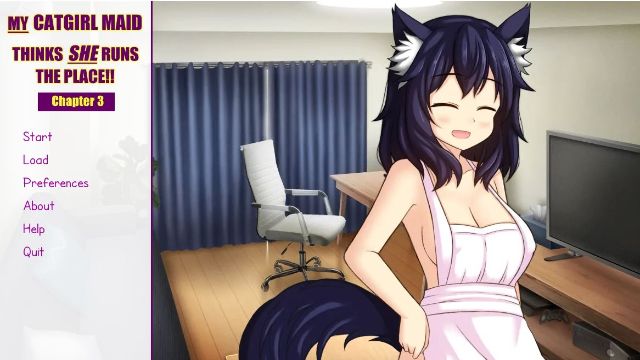 My Catgirl Maid Thinks She Runs the Place APK Android Port is a slice of life comedy where the title pretty much covers what’s going to happen.
It stars a catgirl named Cynthia who becomes your maid in exchange for getting to live in your apartment.
Aside from her being secretive about her past, you quickly discover she’s not that great of a maid. But she tries hard damn it!​

My Catgirl Maid Thinks She Runs The Place is a slice of life comedy with a little heart thrown in for good measure.

In this rejected fairy tail romance, our heroes, a depressed mid-20s office worker and an energetic catgirl from another world named Cynthia, begin their life together in a small one bedroom apartment. Shenanigans ensue.

Over time, the two grow closer and closer but as Cynthia’s past comes more to light, the two’s relationship is called into question. Can they overcome the trial or will their hearts forever be worlds apart?

Chapter 1: Update 1.2 (May 18)
– Added Background for Outside Apartment
– New pose for Nude Sprite and minor colour change to Sweater

Chapter 2: Update 1.1 (May 18)
– Added Background for Outside Apartment
– New pose for Nude and Maid Costume Sprite and minor colour change to Sweater

Download files for My Catgirl Maid Thinks She Runs the Place